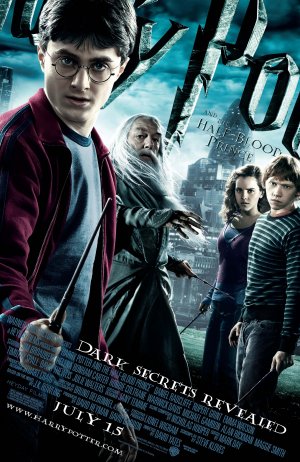 Harry Potter and the Half Blood-Prince (2009)


Will the director from the previous film help bring some stability and uniformity to this ever-changing franchise?

This is the first Harry Potter film where we see the filmmakers expand the well known wizarding world from its boarding school confines into well-known real locations, like the attack by the Death Eaters on the Millennium Bridge. This broader world helps add scope reminding us this is not just fantasy.

The visual aspects of the film have become more stylized, and under the directorship of David Yates the trips into the pensieve, the memory viewer, have an unsaturated look to them. The magic in this film is improved by the use of non-verbal spells allowing the action and dialogue to run smoothly.

It would take an accomplished actor to outshine a cast which includes Robbie Coltrane, Michael Gambon, Dame Maggie Smith, Alan Rickman, Richard Griffith and Warwick Davis. This was made possible with the casting of Jim Broadbent who plays Horace Slughorn the new potions master. Slughorn has been brought out of retirement by Dumbledore and Broadbent’s performance is one of the real treats of the film, playing Slughorn with all the pomposity that his character needed. The scene at the Slug Club dinner, where he is segregating the wizards that are useful to him, shows a side of his character you would associate more with the villain Voldemort.

After five films of being a cameo character this film finally sees Draco Malfoy, played by Tom Felton, getting a decent storyline and character arc. The way his storyline works means he gets plenty of solo screen time and despite a lack of dialogue his performance is strong. When he is with other characters he is equally as impressive: the scenes with Snape and Dumbledore are of note as he manages the difficult task of not being out-performed.

This is the best film of the franchise so far and if Yates continues with his improvements over the next two films they should be something to behold.