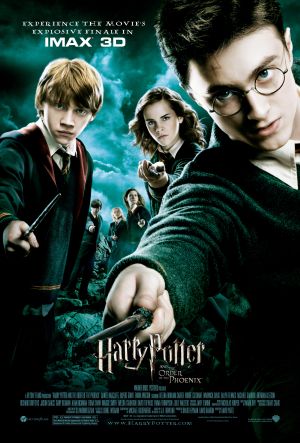 Harry Potter and the Order of the Phoenix (2007)


With yet another director change and political battle side-step, how will this film match up against its predecessor?

With an undercurrent of political turmoil the choice of David Yates as director was a good one. Despite his lack of blockbuster experience, his vast experience with television, directing the political thrillers “State of Play” and “Girl in the Cafe” has given him a good grounding.

He creates a movie that adults, teenagers and children can enjoy by mixing the political power struggle between Dumbledore and Fudge/Umbridge with the teenage angst of Harry’s love for Cho and the wonder of the magic in well known locations, as can be seen by the broom stick fly-over of London.

The political fight comes to Hogwarts in the form of Dolores Umbridge, who is sent by the Minister of Magic to observe and control Hogwarts from within. Imelda Staunton plays Umbridge as a nauseating, sickly-sweet bureaucrat who uses her persona to control every situation. She, like the Vogons from The Hitchhiker’s Guide to the Galaxy, is “Not actually evil, but bad-tempered, bureaucratic, officious and callous”

Due to Yates, or perhaps his age, Daniel Radcliffe’s performance as Harry is certainly more polished with him being conflicted, isolated and sometimes murderously angry. However the scenes where he shows how much he has progressed as an actor are the ‘Dumbledore’s Army’ lessons where he seems to be doing an impression of Professor Lupin (David Thewlis), with his cardigan and gentle nature in the way he teaches.

Despite the unusual choice of director, the film as a whole is the strongest yet and makes the next film a treat worth waiting for.