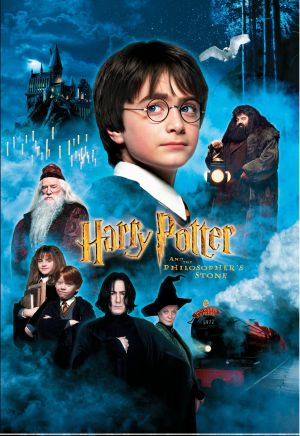 Harry Potter and the Philosophers Stone (2001)


With an all-star cast, a cult following and being based on arguably the best series of books for a generation this film has a lot to live up to. But does it meet expectations?

The first in any series can become a long introduction of the characters, and this film falls into that trap. After introducing Dumbledore, McGonagall and Hagrid in the first scene, the whole film feels like a journey of introductions to characters and locations with 11 year old Harry as tour guide.

Even with the likely possibility of the film turning into an introduction line at a wedding it resists this due to two main points: the writing and casting. With any adaptation comes the task of cutting scenes while keeping the heart of the story intact and by making the film Philosopher Stone-centric the story becomes streamlined resulting in its comfortable length rather than the three and a half hour epic it could have been.

The casting indicates just how well the book was received as can be seen in the cameo roles. The scene in Ollivander’s Wand Shop shows this attraction as John Hurt, arguably the best actor of his generation, shows the young Daniel Radcliffe just how much can be done with the eyes and dramatic pauses.

For their age, the three leads manage to portray characters that engage the audience. They could be seen as caricatures at this stage however they do improve when they are with more experienced actors.

This was a good way to start the franchise however a good bit of room has been left for improvement.