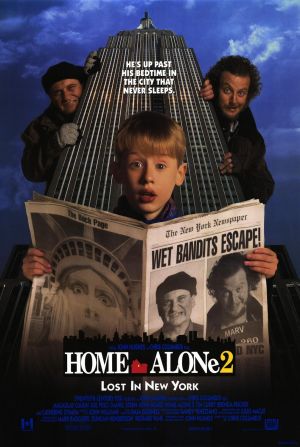 
Is a change of scenery enough variety to shake up the Home Alone franchise?

Once again, Kevin’s family is going away for the holiday season and this time they’re determined to not leave anyone behind. However after a mix up at the airport, Kevin heads to New York while his family fly to Miami; making the most of his time in the Big Apple, Kevin runs into a pair that he’d rather avoid: the sticky burglars from the previous film.

With a display that takes a great confidence and talent to execute effectively, Macauley Culkin once again completely steals the show as Kevin. His witty remarks are a joy to watch as he outsmarts adults and deceives his elders, often in hilarious scenes. The addition of Tim Curry’s Concierge character is a great enemy to counterbalance Kevin, adding a non-criminal third party that Kevin can interact with and overcome. He doesn’t quite portray a villain, but certainly does his best to throw obstacles at Kevin, setting the scene for funny conflicts at every possible moment.

The main issue with Home Alone 2 is its incredible similarity to the first film; the early scenes in particular are highly reminiscent of the first film and almost appear to be the same footage used. This results in an opening that is way too repetitive and drains any real early interest in the film. The film’s almost identical story creates this problem and takes a while to move aside, but once it does the film launches into the same slapstick humour style that made the last film so fun to watch, without going over old ground.

Despite being a children’s comedy on the outside, the film is packed with grown up humour and often extreme violence; a great example of this humour is when Kevin’s uncle says that Kevin will, ‘never grow up feeling like a real man,’ if he walks in on him in the shower. Cleverly, the humorous and violent aspects are made light-hearted and innocent by using silly sound effects, allowing most of it to bypass younger audience member’s attention.

Despite following an extremely similar pattern to it's predecessor, Home Alone 2: Lost in New York is still certainly worth a watch as McCulkin once again steals the show with some truly laugh out loud moments and over the top light-hearted violence.