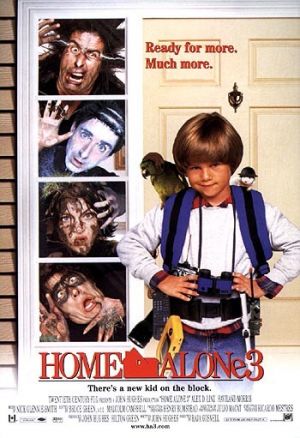 When 8 year old Alex is left at home with a bad case of Chickenpox, he notices that there’s something not right in the neighbourhood. As he tries to tell people about the thieves roaming the area, no one believes him and he must take matters into his own hands.

To give this third instalment the benefit of the doubt, changing the lead character was always going to be a difficult task. But that’s where any sympathy ends. The entirely new line up of largely unseen and low key actors fail to make any significant impression, which means Alex has the limelight to show off his hopefully wonderful personality. Unfortunately, Alex largely comes across as rather annoying while attempting to be adorable and makes sure that any bravery set by Macauley Culkin’s Kevin is left at the door.

With the slapstick, dumb villainous duo from Home Alone 1 and 2 replaced by a squad of European villains, the film takes a light-hearted franchise and tries to make it more serious. With their aim to recover a chipboard for a nuclear weapon, the franchise no longer feels like a cheerful, Christmas movie, but a weak attempt at an action packed spy film.

As well as the new villains, we also see any opportunity of an action scene grasped until it becomes boring. An example of this is a simple chase between the villains and a video camera linked up to a remote control car. The scene lasts far too long and completely removes any silly humour previously found in these types of sequences. When the inevitable booby trap scenes are finally introduced, the film makes a huge point of cramming in as many elaborate tricks as possible, making them boring to watch as well as a little predictable.

With an incredibly weak attempt at copying the formula of the previous two films, Home Alone 3 massively fails at generating any interest or developing characters enough for the viewer to care for their outcome. This is an extremely poor showing that’s lost almost all the Christmas charm that the previous two films did so well to build.