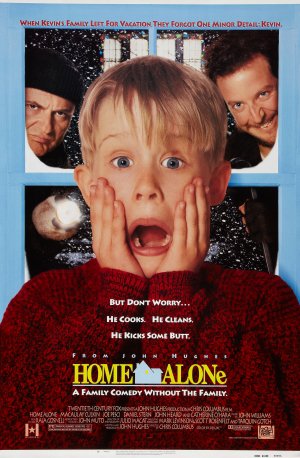 
Traps, burglars and a brave kid, but what steals the show?

When an 8-year-old Kevin is left behind from a family vacation, he must fend off a pair of local thieves, while attempting to continue life as the man of the house.

For the majority of the film we see Kevin controlling the scenes on his own, especially as it only takes fifteen minutes for him to be left alone at home. Thanks to this, child-star Macauley Culkin really shines and makes the role his own as a fiercely brave but emotionally vulnerable kid. Showing acting talent beyond his age, at only 10 years old, Culkin really makes this film something special, creating a memorable character and a Christmas film that sits well in many people’s memories.

Using his age to his advantage, he hilariously pretends to be as grown up as possible, resulting in scene after scene of funny moments. Prime examples of this are when he mimes along to White Christmas while applying aftershave and combing his hair, and when he does the weekly shop while convincing a lady in a supermarket that he’s with his parents. It’s moments like these, as well as his not-so-subtle overcoming the fear of the basement radiator in the film, which display his well-established character arc.

For many viewers, being left at home as a child may be a pretty non-relatable experience, and this is where the villains come in useful by offering a counterbalance for Kevin to overcome. Harry and Marv’s main goal is to burgle Kevin’s family’s house, only with Kevin standing in their way. The addition of this pretty dumb duo adds a reason to support Kevin and his fight against their insistent intrusions, as well as continuously providing a slapstick comedy element.

Home Alone is largely memorable for the booby traps and burglars trying to burgle a family home; however the film massively excels in other areas, specifically character build up and the young actor's performance, creating a spectacular and loveable all round Christmas film. Let's hope that the Home Alone 2 keeps up the pace.