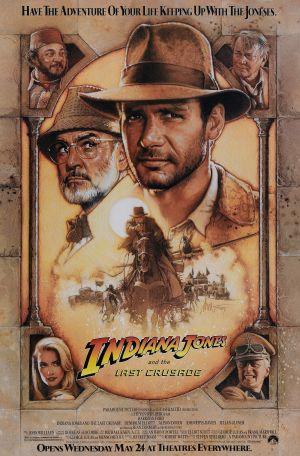 Indiana Jones and the Last Crusade (1989)


With his first outing being an absolute knock out and his second not too far off the mark how would Indy fare in this third installment?

Upon hearing from Walter Donavan, a private collector, that the mission for the Holy Grail went badly wrong, Indiana Jones and museum curator Marcus Brody venture to Italy in search of Indy’s father. However, upon retrieving Dr. Henry Jones in Nazi territory, the rescue mission turns into a race to find the Holy Grail before the Nazis.

Due to audience familiarity of the Holy Grail, more time is left for either humorous interactions with Indiana’s father or some classic hat grabbing, whip slinging action. Time is spent seeing the hero out of his comfort zone and is executed brilliantly while travelling with his father, Dr. Henry Jones. This role is played cleverly by Sean Connery, as being barely older than Harrison Ford he managed to not only demand the paternal respect from Ford’s “Junior”, but his presence on screen helps create a well rounded character. He also does a good job reminding the audience that Jones Jr. is an educator not just an adventurer by challenging him intellectually.

The Last Crusade seems a lot lighter in its attitude than Raiders. The action seems comedy-heavy sometimes – especially when Henry Jones is involved – and lacks the emotional and realistic nature of Raiders. An example of this is Hitler autographing the journal. That sort of deliberate joke can now fit into the franchise as there is enough depth and respect for Indiana Jones that it doesn’t seem ridiculous.

The Last Crusade is what no one could have predicted: a film as good as the original. It’s more accessible to younger viewers and is more joke-orientated than the previous two put together.