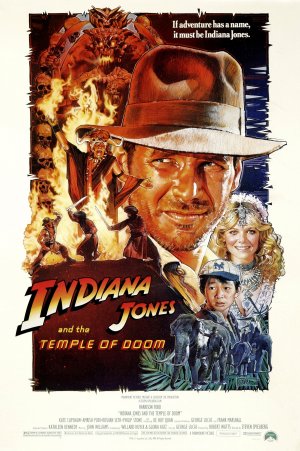 
A prequel can only be as good as its predecessors bare bones allow. Luckily for the second instalment of Indiana Jones the bare bones were pretty extensive.

Set a year or two before the events of Raiders of the Lost Ark, Indiana Jones is journeying through India to recover a sacred stone that has been stolen by a religious cult. When joined with four others these stones have the power to establish the reign of their god in place of all others.

Lucas and Spielberg open Temple of Doom with lots of glitz and glamour with singer Willie Scott, played by Kate Capshaw, performing a Cantonese version of Anything Goes in a Shanghai nightclub. This visual change from its predecessor doesn’t last long when a fight ensues which has the same adventure action we’ve come to expect from Indi. Starting with something different gives a visual shock which is great as an opening however when the action returns to more familiar environments the real fun begins.

One of the joys of this prequel is the performance of Ke Huy-Quan as Short Round. He brings a caring warmth as well as humour, which is particularly visible in the scenes where he drives with boxes attached to his feet or the touching moment where he says “I love you. Wake up Indy, you’re my best friend.”

The Temple of Doom is a lot more static than Raiders as Indiana only travels once; such static movement means that less action takes place and more talking replaces it which gives time to expand Professor Jones back story. On the other hand the character of Scott quickly becomes annoying as she is deliberately dumb and constantly chattering, after the great character of Marion Ravenwood in Raiders, Scott is a letdown as she doesn’t bring the fight that you want from a leading lady.

Overall Temple of Doom is an entertaining, cheery Indiana adventure, but it is certainly not Professor Jones’s most inspiring adventure.