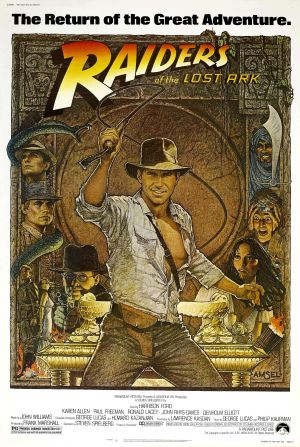 
Many films are seen as classics thirty years after they are made, but was this film a classic almost straight away?

Set in 1936, Raiders of the Lost Ark tells the story of adventurer/archaeologist Indiana Jones, who hears from a colleague about a biblical artefact which possibly holds the key to human existence: The Ark of the Covenant. His journey to find it takes him to Asia and Africa in a race against rival archaeologist, Frenchman René Belloq who is aided by a group of Nazis.

The film opens with one of the most iconic scenes in film history, in which Jones judges the weight of the golden idol with a bag of sand, reaching under a lowering door to get his whip, being chased by a giant rolling bolder and finally escaping from some natives by flying off into the sunset, the action is none stop. None of the action seems laboured or out of place with every little deed having a consequence. Current adventure films often have a car chase for the sake of a car chase but fortunately Raiders of the Lost Ark avoids this pit-fall and gives a steady, consistent narrative which always explains itself. If there is an action sequence there is a reason for it.

Indiana Jones is played by Harrison Ford with a style and swagger reminiscent of Clark Gable in his prime, this aspect of Ford’s performance helped age the film on its release which has meant that it has lasted and looks classic rather than a dated eighties film. Countering Ford is Karen Allen who plays Marion Ravenwood, a smart, feisty woman who is also a capable drinker. Her performance is well rounded and she manages to go from damsel in distress, hiding in a barrel, to saving Indiana from mortal injury.

The film is now three decades old but stills looks brand new. It may not have the CGI effects of recent blockbusters but it knocks the socks off most of them for acting, story and characters.