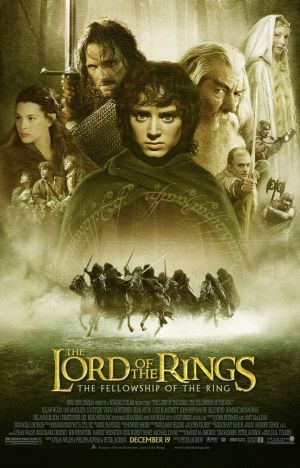 
With fan expectation and the fate of Middle Earth in his hands, can Frodo Baggins succeed?

Frodo Baggins inherits the ring of power from his uncle which a wizard, Gandalf, tells him must be taken to Rivendell. This starts Frodo on a dangerous journey that will hold the fate of the world in his hands.

The film opens with a brave decision to have a large prologue that not only gives the history of the ring but also introduces the basics of each culture. This helps engage new audiences to the piece and aids them in easily differentiating between races. Allowing expansive explanations prevent the film from collapsing under the weight of such well-known and comprehensive literature and the design of this fictional world is expertly brought together by screenwriters John Howe and Alan Lee and at times appears more like a historical adventure than a fantasy.

Counteracting the explanatory scenes are skirmishes with the goblins and uruk-hai that add pace to the film. The placing of these break up the explanatory parts allowing for more straight forward story telling while still keeping an energetic feel to the film. Director Peter Jackson uses dynamic camera movements in the action sequences to immerse the audience; one particularly memorable shot follows an arrow fired by Legolas all the way to embedding into a goblins head.

Of all the character created by J.R.R. Tolkien the most iconic is Gandalf the Grey who is brought to life by Sir Ian McKellen; he brings his wealth of experience to this role creating a wise character that was based on Tolkien himself. His screen presence is most noticeable at the Council of Elrond, where characters discuss the fate of the ring, and despite the quality and quantity of actors in the scene McKellen controls the chaos with limited lines but expressive eyes.

The Fellowship of the Ring is an intense and powerful start to the franchise by managing to balance excitement, intense action sequences, in depth discussions and explanatory scenes to introduce the fantasy world.