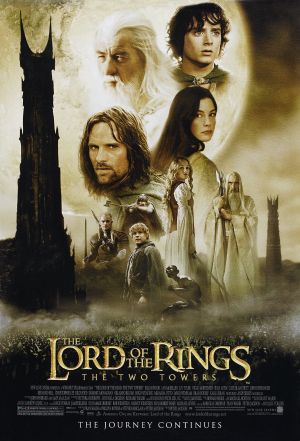 
With the fellowship separated can the two towers successfully follow three journeys?

Lost in the maze of rock, Emyn Muil, Sam and Frodo must put their trust in the ring-driven creature, Gollum, to help them get to Mordor. With Merry and Pippin in the hands of Saruman’s army; Aragon, Legolas and Gimli give chase ending up in the Land of Rohan where they must loosen the control that Saruman has over King Théoden.

Peter Jackson expertly entwining three stories is a triumph of the film that allows the story to flourish and keeps a constant exciting pace. This works best during the long action of the Battle of Helms Deep that could appear dull due to its length. Cleverly Jackson moves away from the scene and focuses on slower paced storylines allowing a break from the action so that the battle appears faster and more exciting when it is brought back in. This structure also helps the stories appear to move along off screen, where the story can still continue, allowing for far more efficient storytelling.

The expansion of characters from the last film is aided by the adaptation by Jackson along with Fran Walsh and Philippa Boyens. They work tirelessly to build the audiences connection with characters so that they have a more rounded place to fit in the world – this is seen when they take lines by already established characters and give them to a new character. One noticeable instance is when an original line from Gandalf is used by Grima Wormtongue that twists the meaning from hope to despair showing how a servant can be more aware of emotional states for manipulation.

John Rhys Davies’ performance as Gimli keeps the epic story more light-hearted with the joy shown in his transformation from grumpy dwarf to the comedy relief with his interactions with Legolas. Their competition of who can kill the most at Helm’s Deep lightens the mood of what could have been an extremely dark battle.

The way Jackson uses all three stories as buffers for each other’s action packed scenes keeps this behemoth of a film rolling at a fast pace and keeps interest. But it is the small interactions between the characters in the middle of chaotic action that are really what makes the film stand out from other war epics.