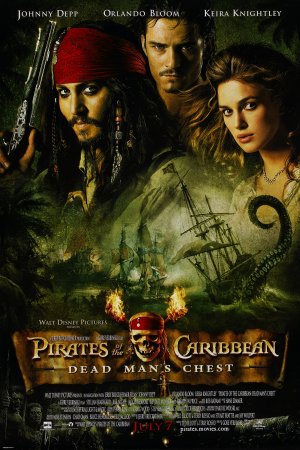 
After the success of the first film, can Dead Man’s Chest resist a franchise downfall into rum filled obscurity?

In this adventure Swann and Turner reunite to help save Jack Sparrow’s soul from the infamous pirate captain Davy Jones. To prevent Sparrow’s lifelong incarceration they must find Davy Jones’ heart which has been locked in a chest and hidden away.

Johnny Depp returns as the eccentric pirate Captain Jack Sparrow and provides much of the same in a larger than life performance which once again proves hilarious for all ages. One noticeable difference is Jack Sparrow being mentioned as a legendary pirate, ‘he is a dying breed,’ which seems heavily pushed and not entirely valid as he avoids all conflict and regular pirate duties.

On the other hand, Davey Jones is introduced as the real deal: a legendary character played brilliantly by Bill Nighy who provides a broad, booming voice which dominates other characters at his own slow drawn-out pace; visually he’s also striking as a tall tentacle-bearded, Captain with furious searching eyes. It’s all marvellously fantastical and he’s really what the franchise needed to propel itself into a fully fledged franchise.

A problem with Dead Man’s chest is that Davy Jones only appears half way through; as Dead Man’s Chest and At World’s End were made as a two part conclusion to a trilogy it seems Dead Man’s Chest has fallen short of a solid and exciting story resulting in a slow, pointless and overall frustrating first 60 minutes.

However there are glimpses of greatness, with action scenes which are again amplified to excess but nonetheless suitable for the target audience. In particular the section in which Sparrow is a tribal god, with the group swinging off bone cages and Sparrow performing acrobatics using a large pole all come across like an old fashioned Indiana Jones frolic which is a great credit.

The major downfall of Dead Man’s Chest’s is its position as the first of two films resulting in a lack of narrative drive and content and is only marginally saved by the strength of certain characters.