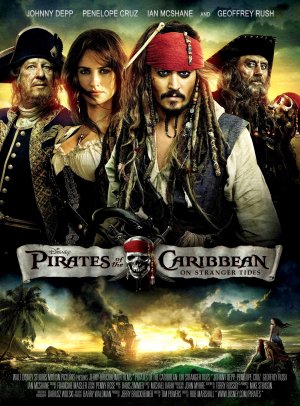 Pirates of the Caribbean: On Stranger Tides (2011)


For a franchise continuing without two of its three lead characters, could this Disney outing be a ship without a rudder

Aided by old rival Captain Barbossa, Jack Sparrow returns to seek out the Fountain of Youth. But with Blackbeard and an old flame appearing during the venture he risks his life and his heart for the pirate way.

On Stranger Tides provides the same amplified action as has been displayed in the previous instalments. Sparrow’s getaway from the British forces puts him back on form as an eccentrically inventive pirate as he swings from chandeliers, balances on moving carts, steals ladies earrings and eats cakes. This type of action is perfect for its target market, children, and is a key strength of the franchise.

However, what has really made the franchise stand out from the crowd is the strength of its characters but with its best, Davy Jones, out of the picture it falls on Sparrow and new faces to retain interest. Blackbeard, the new villain with, is played rather dryly by Ian McShane but whereas Barbossa was an entertaining pantomime pirate and Davy Jones mixed emotional turmoil with fierce charisma, Blackbeard fails to make any significant connection. McShane plays him as a straight dislikeable villain with none of the entertaining flavour expected from Pirates characters and thus he will be the most forgettable villain to date.

While dressed identically and sword fighting him, Angelica is shown quite literally as Sparrow’s equal. Angelica’s feisty attitude provided by Penélope Cruz’s, who delivers her usual powerful charisma, gives a superb vitality to the role. Unfortunately it’s not long until this strength of character is undermined by her emotions for others which bring her down to Elizabeth Swann territory – more visually important than character integral.

The only convincing new elements to the franchise are the Christian preacher and mermaid who provide a sideline love story seemingly replacing the Swann-Turner relationship of previous films. What’s more, the mermaids played as horrific beautiful monsters aren’t entirely explored and could be a great storyline to utilise in a future Pirates movie.

On Stranger Tides offers the same action adventure as the other Pirates films, but with a lack of truly interesting characters for Sparrow to play off, this installment lacks substance and appeal.