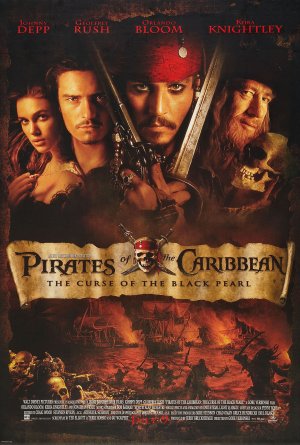 Pirates of the Caribbean: The Curse of the Black Pearl (2003)


Disney took a risk transforming an amusement park ride into a film, but does Pirates of the Caribbean merrily walk the plank?

When pirates kidnap Elizabeth Swann, a wealthy and beautiful lady, a young blacksmith enrols a renegade Captain to help him save her. When they realise a curse surrounds the villainous pirates they must shrink away or risk their lives in battle.

Johnny Depp is a delight to watch as Pirates of the Caribbean’s most famous export, Captain Jack Sparrow. He is an iconic, likeable character and is also entirely unique for a star of a major blockbuster; he’s not brave, he’s not charming, he’s not selfless and he continually fails as a pirate. It is this combination of rebellious traits which makes him one of the most memorable adventure characters in recent years for kids and adults alike.

Appropriately, Disney provides a suitable romance in the form of Elizabeth Swann and Will Turner, played by Keira Knightley and Orlando Bloom. This side narrative lacks any real conviction with both actors failing to build any real chemistry. What proves more distracting is Swann’s obvious affection for the much more exciting character of Sparrow who would have been a more exciting and unpredictable love interest.

The major nemesis to Sparrow is the famous pirate Captain Barbossa, played by Geoffrey Rush, who delivers a superbly villainous counterpart to Sparrow’s eccentricity with a pantomime esque delivery. He is the epitome of a traditional devilish pirate and is easily a match for Sparrow in persona – a task not easily achieved.

The action sequences are brilliantly executed but at times the action is heightened unnecessarily. An example is the Will Turner versus Jack Sparrow sword fight in Turner’s workshop. They have a simple swordfight which is enhanced by them balancing on barrels, getting catapulted on to rafter beams and one of the swords even catches on fire creating almost a lightsaber effect. Admittedly this is Disney action-adventure but surely kids don’t need quite this much constant change during a sequence to keep interest.

Pirates of the Caribbean is a typical Disney outing, it has comic characters, love interests and a good mixture of slapstick and all out action. For an enjoyable, easy to watch live action adventure not much outdoes this.