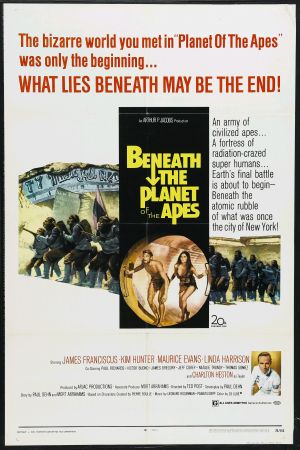 
Is Beneath the Planet of the Apes a decent follow up to its successful older brother?

Brent is the only survivor of a rescue mission to save previously stranded space-explorer, Taylor. When he finds a way under the planet’s surface he discovers there’s more to the mysterious habitat than is first apparent.

Instead of focusing solely on the apes as primary villains, the creators took a brave step to introduce a completely new species of human-type-beings: ones with telekinetic abilities. Conflict with a new human-form creature under the planet’s surface is a nice change to the normally violent battles with the primitive and brutal apes who usually beat their enemies with blunt objects; in fact, these new creatures stand out like a sore thumb among the planet’s main inhabitants, the apes. Saying that, the telekinetic humans and their aggressive religious beliefs become comical in a Monty Python style, with them singing hymns and praying to an atomic bomb in the shape of a huge, obvious phallic symbol. This is hard to take seriously and ultimately makes them fail as a new and interesting third party.

With a new opposition, we also have a new lead in Brent, played by James Franciscus, but everything about him seems to be similar to Heston’s Taylor, and this instantly restricts him from becoming a fresh character. Franciscus fails to stamp any authority on his role and never appears convincing as the lead despite his focal position. The similarities between the two seem to be a ploy in establishing them as allies and distancing them from the mute slave humans, but when Taylor eventually gets involved later in the film it becomes obvious Brent doesn’t stand out enough as an engaging lead. More time was obviously spent on developing the telekinetic humans than the new lead, which wouldn’t be a problem if they were interesting enough to carry the film alone.

Beneath the Planet of the Apes is a good continuation of the previous story, but doesn't have the same level of intricacy. It's let down heavily by a non-convincing new race and the too familiar lead and ultimately fails to stand out as a sequel.