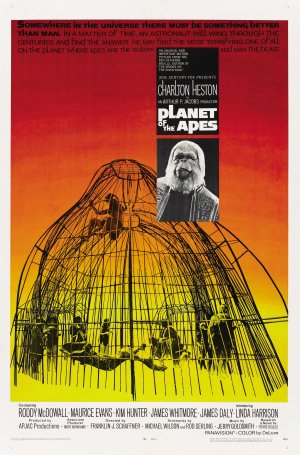 
Does this film that kicked off a long-running franchise just monkey around or set strong foundations?

A group of space travellers crash on a mysterious planet, only to find that it’s run by another species that have a primitive way of dealing with unwanted visitors.

Some scenes come across as particularly out-dated seeing as Planet of the Apes was released forty years ago, especially in the filming and editing departments. The opening scenes of the ship crashing use a stretched and misshaped image to represent chaos but now appears fairly amateurish compared to the wealth of effects now available. Obviously there’s nothing that can be done about that now, but the beginning doesn’t stand the test of time particularly well.

However, the films rawness is mostly to its credit and works well to set the scene, as it successfully reflects the desolate planet and the group’s wandering/excavation. A large part of the film is set in barren deserts or crowded forests, which is accentuated by the use of long shots and the group’s ridiculous space suits, which stick out like a sore thumb against the planet’s nature.

The film also contains a great deal of depth; the question posed due to the role swap between humans and animals is great, which is built upon by the politics, religious views, and hierarchy of the apes. This is summed up perfectly by one of the ape’s leaders: “There is no contradiction between science and the faith.” It’s this kind of depth that makes the world believable and fantastic to watch, setting up the franchise for the next five plus decades.

The story is fun and individual in its angle that a species could evolve ahead of humans, even if it does need a bit of a silly introduction to get there. It's well worth sticking through the opening scenes and persevering as it turns out to be a great start to a franchise and a unique film about the sciences and history of mankind versus evolution.