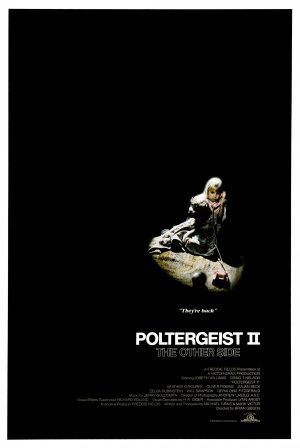 
With the first Poltergeist being nominated for three Oscar nominations, how will ‘Poltergesit II: The Other Side’ fair?

After the spiritual shenanigans of the first film, the Freeling family have moved away from their old family home, but it seems that their ghostly enemies won’t leave them be.

Poltergeist II creates a stronger opening, not needing any new introductions to paranormal behaviour. Living in a new house, the Freeling’s thought they would be safe from their paranormal past, however once again Carol Anne has contact with the dead, but this time through the use of a toy phone.

One of the most interesting aspects of Poltergeist II is the evil and genuinely spooky, Henry Kane. His desire to take the little girl to the other side is reminiscent of the first Poltergeist and an extension to what we learned in the first film. The inclusion of a sometimes physical enemy representing the dead is a welcome addition to the franchise as the audience now have a face to dislike and the family know who they have to destroy.

Another brilliant new addition to the line up is Taylor, the Indian guardian sent by Tangina, whose role in the movie is to protect the family from Kane and the other ‘ghosts’. In contrast to the first film, Taylor is a strong singular character for the audience to root for, rather than a series of clairvoyants.

Steve (played by Craig T. Nelson) seems oddly sceptical, considering the family’s past. After unknowingly drinking a small creature from his bottle of whiskey, Steve goes slightly insane while possessed by Henry Kane. This shows the different methods that the enemy use to infiltrate the family, one of the ways that this film is an improvement on the previous.

In parts, this film can be genuinely creepy leaving the viewer uncomfortable, especially in the Henry Kane scenes. The new characters merit this subtly-suspenseful film, as does the more interesting plot, creating a more engaging film overall. Can Poltergeist III follow the trend and better it?