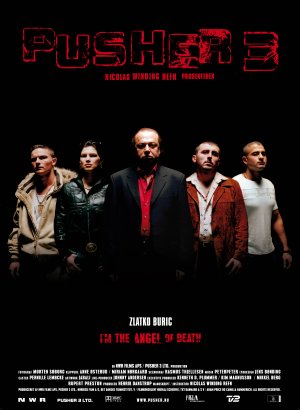 
With a focus on drama and comedy in Pusher II, what can the third instalment add to the series?

Pusher III follows drug dealer, Milo, throughout a day filled with drug deals, anonymous meetings and organising his daughters twenty-fifth birthday party. Surrounded by conflicting pressures, Milo must stay alive by doing everything necessary to not miss his only child’s celebration.

Played by Zlatko Buric, Milo has appeared in the last two films and is one of the most intriguing characters of the series as despite his drug dealer credentials he appears dopey, kind and most of all, distracted. Cinema mostly shows drug dealers as entirely focussed on their work but the Pusher series has always seen Milo dealing with normal problems first and foremost. This is a fascinating vantage point for the director and writer, Nicolas Winding Refn, to create story from and the focus on Milo is a fantastic strength to the film.

As with the last film, Pusher III has a focus on an unconventional family. As the film centres on his daughters party, Milo mentions on several occasions to other drug dealers that it’s his daughter’s birthday party that night, hilariously expecting them to entirely understand his situation. This being the case, Milo comes across as a kind and attentive father despite his career choices – a brave and interesting move for a protagonist in a crime film. His speech at the party shows an insight into his motivations: ‘I have taken care of her all my life… always count on me. I hope that has come true.’ This once again builds on the complex characters the Pusher series has to offer.

Despite the same set up, it seems the original vision of the Pusher series has been sedated over time to create Pusher III which, despite being gruesome in parts, is largely a drama film about family, age and stressful situations. Refn still likes the violent side to his work but is much keener on providing substantial story and character before providing pointless action scenes.

The natural evolution of Refn’s interest in character sees Pusher III stand as the most confident film in the series to date. The film contains violence, comedy and beautiful relationships and is executed with style.