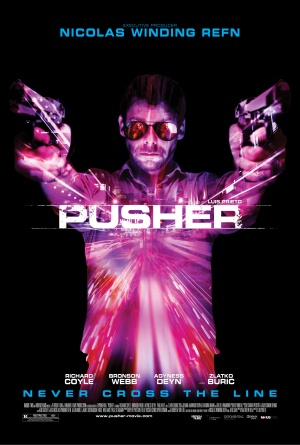 
For the remake of a budget Danish crime film, how will the English language version fare fifteen years on?

Pusher follows Frank, a small time drug dealer who ends up owing serious money to a dangerous criminal when cops bust up a deal. Frank has a week to find the money or else his limbs go first.

Luis Prieto’s remake of Pusher has an extremely polished finish to it compared to the Refn directed original; with a slick soundtrack, stylish visuals and an eye on beautiful cast members Pusher, set in London, is all about attracting a wider audience but in the process loses the gritty realism of Refn’s take on an underworld of unglamorous lifestyles.

The remake stars Richard Coyle, who has toned up for the part, slicked his hair back and plays the macho role well. Confusingly however his character, Frank, appears contradictory being both cautious and a loose cannon, beating random men up in clubs but not being forceful as a drug dealer until his life is at stake. This version also sees Frank more emotionally open to the audience, as although he keeps his life encompassing problems to himself, Frank is shown for example crying in a back alley which helps engage the audience.

Zlatko Buric is the only actor to return in the remake, as the dangerous drug dealer Milo, and he once again steals the show, this time as a kind father figure to Frank who impressively balances disconcerting friendly banter during intimidation and later torture. With wrinkles and weirdly greasy hair, Milo is also the only cast member who doesn’t look like a model, and his role as the nasty underbelly of crime’s easy-living is a clever but simple aesthetic.

Although the surface ingredients seem to work, Pusher has been rebranded as a simple British crime film more akin to The Business or Sexy Beast, lacking the complexity of characters, as seen by Frank, his girlfriend and his best friend in the original 1996 Pusher.

If you want a simple crime film based around macho personas and enjoy British film then Pusher certainly won’t disappoint, but for a more intelligent crime film with thought out characters and a braver more violent direction, Nicolas Winding Refn’s original is unmissable.