Franchises >> Pusher >> With Blood on My Hands: Pusher II 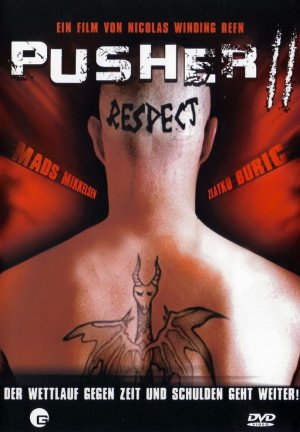 
With an intelligent crime film under his belt, can Refn provide a suitably apt sequel?

The film follows ex-con, Tonny, who upon leaving prison starts to rebuild his life in his home town. But fathering a baby, drug abuse and getting into the families illegal importation business cause more complications than he can handle.

Pusher II is a more character driven affair than the first film with Tonny, played by Mads Mikkelsen, taking the protagonists role. In the first film Tonny was a highly annoying, sex obsessed drug addict and he transitions well in his new role letting his real emotions out on a roller-coaster journey to better himself. An interesting dynamic is created between him and his father, The Duke, whereby Tonny’s continual disappointment to impress his criminal father pushes him to do more desperate and disappointing acts; such as stealing a car and bringing it to his father’s illegal car importation garage: ‘You don’t steal a Ferrari, unless someone’s ordered it!’

Despite the series being based in the crime genre, with extreme violence and illegal activities ever present, drama has become a main focus for Pusher II resulting in a more intelligent and believable world. Pusher II is packed with drama, such as a scene in an apartment block of Tonny holding a bottle of wine while he is told that his prostitute mother died a few months before – this is fantastically subdued and shows the strength and importance of character.

Along with crime and drama, Pusher II sees dark comedy elements return to the series helped along by a new character: Kurt the Cunt. He is the bad friend to Tonny, influencing Tonny to initiate his downfall back into drugs, drink and unreliability. A lot of the humour comes from this character as he pops up occasionally to devastate everything around him; flushing drugs down a toilet, asking to be shot, and burgling his own apartment are just a glimpse at the chaos he causes which is a fantastic addition to an already compelling series.

Pusher II benefits from having such an emotionally open character, something which Pusher lacked, and despite its crime roots this Pusher film has subverted the genre to focus on drama and comedy in impressively equal measure.