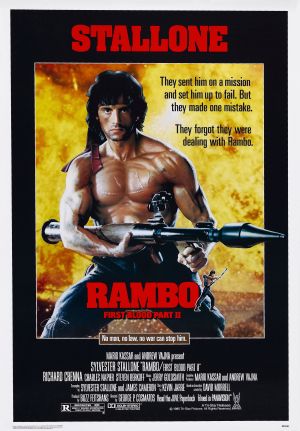 
Are explosions, kills and rocket launchers enough to make an action sequel successful?

First Blood Part II begins shortly after where the first finished with Rambo serving his time in jail. Here he’s approached by his past-senior officer, Colonel Trautman, with an option for Rambo to get out of prison by returning to Vietnam.

The inclusion of the village and its hostages creates a more interesting plot for the audience, offering John Rambo the chance to be the hero, something that he wasn’t afforded in his solitary first role. However, his care for others is non-existent, making it very difficult for viewer connection on any level, just like the original.

Additionally, and like the first film, he speaks minimally instead spending his time working through a number of different weapons. This persistent mysterious persona does get irritating at times with this persona only breaking open briefly due to a love interest, Co, towards the end of the film. Rambo states, ‘to survive war, you have to become war,’ which is a bleak statement but an interesting insight which adds more character depth and helps builds on the awkward relationship the audience holds with the killing machine.

At the core, First Blood Part II has the same traits as its predecessor and a very consistent and confident John Rambo. For a film centred around the muscle clad hero, Rambo avoids action genre-popular cheesy catchphrases and is unlikely to swoon the ladies, the appeal instead lies in his extraordinary confidence and his skill on the trigger of a series of machine guns.