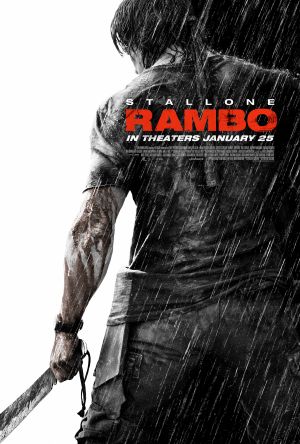 
Twenty years on, does the Rambo franchise still explode at the Box Office?

Rambo’s quiet and peaceful life is interrupted by a group of American tourists looking to help the innocent during the war in Burma. When the group are captured by the Burmese enemy, Rambo is morally inclined to rescue them, with the help of some mercenary soldiers.

The initial scenes have the feel of a quiet retirement story until John Rambo is torn away from his little fishing village. Consistent throughout the entire franchise is Rambo himself, once again only offering conversation when he feels it necessary and leaving his actions to do the talking. This is evident when Lewis (Graham McTavish) attempts to intimidate Rambo, only for him to return with his bow and arrow to save five hostage’s lives.

The group of tourists that approach Rambo are largely dispensable, bar Sarah (Julie Benz) and Michael (Paul Shulze), who represent the majority of the faceless group. By submitting to a pretty lady in need of help, Sarah offers something that’s not been previously part of the franchise: Rambo removing his tough-guy exterior, albeit briefly. Unfortunately, the film attempts to shoehorn in an unnecessary and distracting love story between Michael and Sarah, which is only physically visible at the very end of the film with an affectionate moment. However, by then any audience sentimentality is lost on the couple who are seen as more of a hindrance than a point of engagement.

Having a lead actor of sixty-one years old, Rambo fills the void of physical action scenes with more gun use, offering almost double the kill count of its predecessor, while also providing much more gore, which is at times unneeded. An example of this would be when Rambo pulls a soldier’s throat out with his bare hands or spilling another’s guts with his custom made machete.

Rambo is a modern twist on the three films of the eighties, doing well to maintain the same character twenty years on. Following this character trend, and with action genre audiences now more demanding than ever, the inclusion of people exploding into little bits or chase scenes with nuclear bombs is no surprise.