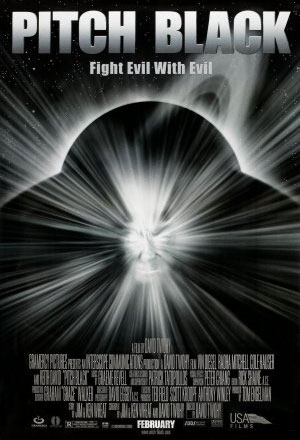 
Does Pitch Black shed any light on the every day, generic action/sci-fi movie?

When a ship crash lands on a mysterious and deserted planet, the captured fugitive, Riddick is the only one with knowledge of the planet they’re on and what the space-travelling crew might find on the sun soaked planet.

As the group quickly discover, the planet has 3 suns in cycle, providing constant sun light. This generates an interesting style, with each sun having a particular colour effect on the planet. Throughout the film scenes implement colour filters, varying between blues and yellows, adding interest to what is largely a dull set and uninteresting planet. Working in unison with the occasional fish-eye lens these coloured effects add a sense of time passing and prevent any boring, continuous day time – a necessary feature until the planet is engulfed in darkness midway through the film.

As an unorthodox lead character, Riddick is far from the traditional hero often found in sci-fi/action films. He relishes being held captive only to break out and display his strength. Delivering yet another macho character, Riddick is extremely similar to Diesel’s characters in xXx and the Fast and Furious franchise. However in Pitch Black, Diesel attempts to play an extremely selfish role by trying to save himself before buckling and risking his life to save the rest of the group. This attempt to shoe horn an affectionate and caring side onto the largely cold-hearted anti hero feels a little forced at times.

Despite Riddick’s presence, the film’s main downfall lies in one key area: the lack of creativity in the supporting cast. Aside from Riddick and a briefly gender confused Jack, none of the other characters have any interesting back story or character traits. Instead, the majority of the characters only serve as an obstacle for Riddick to overcome.

For the first in a modern franchise, Pitch Black makes a decent and original attempt at the sci-fi genre especially in the new age of spaceships and futuristic planets dominating our screens; however, due to a lack of character depth or interest, this won’t last in the minds of many for long.