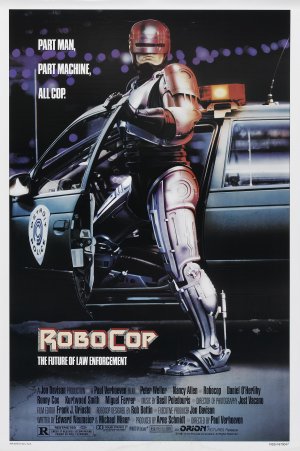 
He’s a well-known beat cop, but how does he stand up to modern action heroes?

RoboCop is built to help clean up Detroit and sort out its large scale decline into criminality, but it soon becomes apparent that a local gang won’t give up it’s dominant position.

The opening sequence introduces Detroit through highly satirical TV news reports and shows it as a heavily capitalist city. This extends to the main villain-controlled corporation that is buying the Detroit police department and sells branded heart replacements that are all the rage. This satire is a fantastic tongue-in-cheek political statement about capitalism, and is carried on throughout creating a funny, yet disturbing prediction on the future of capitalism. This is shown best by the accidental but brutal killing of a man during a conference meeting, where the apparent good guys of the corporation see the tragedy as a business opportunity; this results in an unsettling array of characters whether supposedly good or bad.

RoboCop is naturally the good guy, but replaces compassion with a sense of duty built in by his own past ideologies and internal programming. This clinical approach brilliantly lightens the mood of the film by creating a lot of inappropriate humour and some great one-liners such as: ‘Madam you have suffered an emotional shock, I will notify a rape crisis centre.’ RoboCop’s impressive stature in a blue metal suit only help to distance him from this emotional encounters and although they do stop us empathising with him, they do help to add to these funny moments, as well as helping him look fantastic.

The film isn’t all humour though; it’s also extremely violent with policemen being hunted, pinned to the ground and even having their hands shot off in gruesome explosions of blood. In this way the film aligns itself more with serious crime films than sci-fi action outings, especially during a horrific shooting squad scene that proves to be very shocking and graphic.

As with most action films, the main villain, Dick Jones, is very simplistic as a character; Jones is entirely focused on being dominate and rich, and will murder whoever is needed to succeed and doesn’t care for the wellbeing of anyone but himself. Unfortunately, the film turns most characters into these simplistic statements or devices, rather than being fully developed. RoboCop’s police partner, Nancy Allen, is summed up as being tough by winning a fight, and even the title character fails to deliver; his previous life as Murphy shows him in flashbacks as a family man, but these scenes are so generic that it’s hard to become compassionate.

RoboCop is a dirty, violent and humorous science fiction affair and shows that filmmakers who are brave enough to turn this type of film into a certificate 18 will be rewarded with a highly original film.

Do you agree with our judgement on the metallic officer? Share your comments below