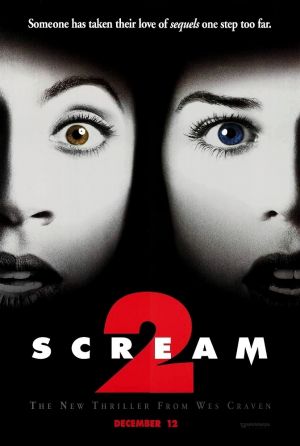 
With Scream established as a mainstream success, can the follow up sustain momentum without murdering its older sibling?

Scream 2 sees the previous films central character, Sidney, move on from her traumatic high school experience to college, but it seems that Ghostface has returned from the grave and is out to get her. Once again she uses horror film predictions to help her not only survive but find out who is behind the Ghostface mask.

Scream’s main selling point was its incessant film referencing and Scream 2 builds on this aspect; this is evident from the opening scene where a couple go to the cinema to watch the movie version of the original film’s story. They also discuss black cinema, black rights as a cinema-goer and representation within the cinema, all while keeping the audience entertained – an impressive feat for a horror film.

Jamie Kennedy plays Randy, the resident film-geek who returns to provide much needed humour with a mix of film referencing. Randy tells the audience the two rules of a sequel, ‘The body count is always bigger’ and ‘The death scenes are always more elaborate, more gore, more carnage.’ Randy’s debates on sequels throughout the film are very topical; his view that Empire Strikes Back is, ‘not a sequel, part of a trilogy, completely planned,’ is an interesting perspective and these conversations provide entertaining diversions from the real cut-throat subject matter at hand.

Unusually for the horror genre, Scream avoided killing off the majority of its characters allowing them to appear in the much anticipated sequel. In particular, Courtney Cox plays the cold-hearted news reporter Gale Weathers and deservedly gets a larger role in this film providing a much needed sub-plot of comedy which offers a break from more serious segments. Cox plays against her black cameraman whose reluctance to be there is stemmed from his thought that, ‘brothers don’t last for long,’ when serial killers are about.

On the whole, Scream 2 does well to emulate the first films key aspects: film referencing and a mix of comedy and horror. But it’s this formulaic recreation of the first film which restrains it from becoming better than the first. It seems that Scream 2 is a perfect example of Randy’s conviction that no sequel outdoes an original.