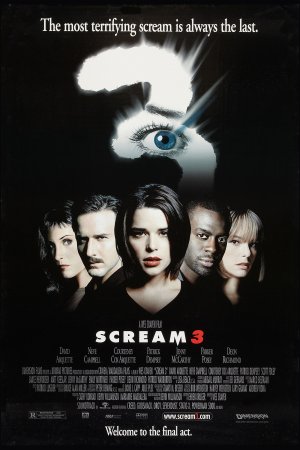 
With Ghostface tracking his victims to Hollywood, can the movies prevent his killing spree a third time?

After surviving two sets of Ghostface killers, Sidney now hides out at a highly secure remote location. However, when she visits the set of a movie being made in Hollywood based on previous events, Ghostface reappears and starts to take more lives.

For a franchise so conscious of providing film analysis, Hollywood seems like a relevant setting for the third instalment. As seen in the previous movies, Scream 3 heavily uses this analysis to provide clever, funny observations of horror movies and exploits the location extensively: ‘Has there been another god-damn rewrite? How… are we supposed to learn our lines when there’s a new script every 15 minutes?’

Sidney, played by Neve Campbell, returns as Ghostface’s target and this being the case we are shown her traumatised state – she is now a woman’s councillor – but these sensitive scenes slow the movie’s pace and Campbell’s performance doesn’t entirely convince.

David Arquette returns as Dewi and has changed from his shy deputy sheriff of the first film to a man capable of taking authority. His injuries from the last film mean he walks with a limp and he takes a role of private investigator, confidently suspecting characters which all result in a brilliant nod to the film noir genre. The franchises’ well known characters return and are used to great effect opposite the actors playing them in the movie ‘Stab 3.’ In particular, a love triangle forms with Dewi, Gale and the actor playing Gale which revives a tired character interaction.

In every Scream film there is a grand reveal of Ghostface’s true identity and Scream 2 in this area was largely a disappointment. However, the Scream 3 reveal is somewhat far-fetched but also thoroughly well thought out, so after a lengthy explanation the film is strengthened by it.

Scream 3 doesn’t match the youthful originality of Scream but the Hollywood setting, comedic aspects and interesting revival of character relationships means this third outing for a horror series is unusually strong.