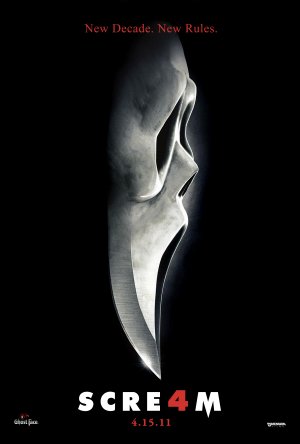 
An eleven year gap between films makes Scream 4 a hard sell for audiences, but can Scream still survive in a new age of horror?

On her return to Woodsboro where the events of the original Scream take place, Sidney finds her old friends healthy and happy, but when Ghostface starts killing people after a ten year absence, this doesn’t stay the case. Sidney must re-live her nightmares and attempt survival for the fourth time.

Despite the lengthy gap between films, Scream 4 quickly shows it is loyal to its predecessors: the film opens with an exciting and clever take on traditional Scream with a one on one chat between Ghostface and his victim. Scream 4 also offers a great deal of film referencing, as is expected of the franchise. Randy, the Scream resident film geek, is replaced by a couple of enthusiastic characters who seem to be more obsessed than Randy which works well to emphasise how easy it is to obtain information in the digital age. One of these characters also openly argues that post-modern horror movies have been, ‘done to death,’ creating a clever irony at the franchise itself.

The biggest alteration between films is the new use of technology; Facebook stalkers, iPhone’s and live video blogs. An App which helps the user imitate the voice of Ghostface is used to great effect to transition quickly between scenes and creatively produces scares which have an odd distance to them. What’s more, the murders are now filmed and uploaded onto video sites and create shockingly extreme internet sensations. This is all relevant to this flash in the pan pop culture and is a clever comparison to the original Scream’s focus on films as teen’s only real source of enjoyment and communication.

Scream 4 is also not sparse of extreme violence; the first Scream saw intestines hanging out but that was the worst the franchise experienced until now; Scream 4 offers intestines, a knife piercing a forehead, a stabbing through a letterbox and many more gruesome visuals. The inclusion of this progressed violence emphasises how different horror has become in the ten years since Scream 3 – suspense can be important but horror has become a competition of which film is more bloody and disgusting.

Scream 4 offers horror fans a strong continuation of the franchise and is strengthened by using a similar set up as the original Scream with a largely youthful cast; that and the great use of technology makes Scream 4 the strongest since the original.