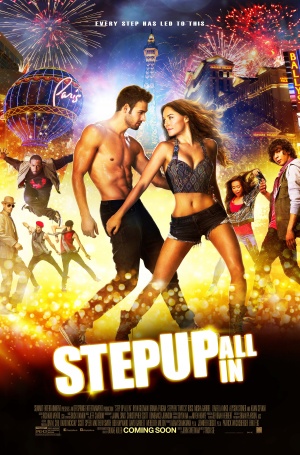 
The largest returning cast and the first reoccurring protagonists show that Step Up is ready to tango. Are you?

When Sean’s dance crew leave him high and dry in Hollywood he enters a high profile dance competition with a motley crew of dancers. Later he discovers his old crew and biggest rival have both made it through to the televised finals and he must decide what matters most: winning or friendship.

Each sequel tries to step up its game in some way and All In is a rare treat for fans of the series with no less than two of the previous lead characters returning – just one would have been a first for the franchise. The combination of these previous main characters is a good idea to bring in some star power (although neither actor has done anything too memorable since their Step Up movies), and it works well to add a Fast and the Furious team effort vibe. Their interest in each other does prove problematic however in trashing both previous love interests in their earlier films – apparently their previous partners only cared for their own careers.

To enter the dance competition they must make a video and this all happens extraordinarily quickly, even by Hollywood film standards, especially when the laboratory setting and props are elaborate and far-fetched. The quick pulling together of a dance group also gives the impression that it’s extremely easy to do what they do (and become semi successful) and largely takes away from their apparent difficult journeys. Usually in films like these people have been training and working hard for years but here the group is hardly seen training and is at top performance level after several days. What’s more, Sean’s own hard life back story is undermined by the groups mocking of the main villain when he’s seen wearing a silly costume in a music video – wasn’t Sean wearing sombreros etc in the opening scenes? This should have made the villain more relatable rather than scorned and shows an inconsistency with characters.

The tension in the film between Sean and his old crew, The Mob, is unnecessary and unfounded, so much so that the writers are unable to explain it. Sean gives his crew the silent treatment throughout and his rivals, Grim Knights, also come off as unnecessarily aggressive. Step Up All In also falls into the trap of becoming far too street for its own good (like other Step Up films), especially in dance offs where the dancers look like they want to punch each other. There’s just no reason for any of the bad blood or tension and the unreasonable hostility seems like the wrong message to show children.

Unfortunately, the dancing doesn’t improve this film much either, with it massively underwhelming after the bold spectacles offered from the last film, Revolution. Props and tricks such as fire, sand, trap doors and weird science labs all try to make up for a lack of dancing wow factor, which is what the film is supposed to be about.

With a lack of reasonable plot and unimpressive dancing you may want to give this one a miss. The original and Revolution are the best of the bunch; it looks like Step Up has just stepped down.

Did you love the returning characters and totally rad dance skills or were you left feeling disappointed like me? How would you like to see the Step Up series evolve from here? Let us know in the comments below.