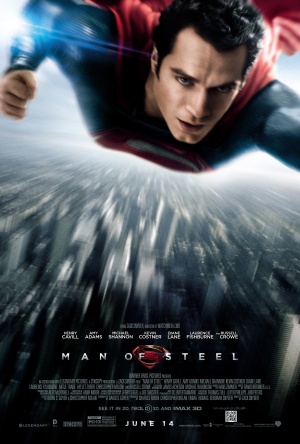 
Will Man of Steel be a disappointing reboot or will it fly past its competition?

When Clark Kent finds a spaceship sent from his home world, Krypton, he triggers a beacon which brings the traitor General Zod to Earth looking to conquer the planet and destroy Superman.

Directed by Zack Snyder, the new film sees a dark and conniving side to Kent, as he learns to handle his powers in secret: he steals clothes from the back of a car when nobody’s around and impales an entire lorry for vengeance. These actions are entirely unseen in previous Superman films but combined with an ultimate desire to help and better mankind the famous protagonist holds his own when compared to such egotistical, rebellious superheroes post 2000.

Man of Steel’s origin setup has led to another major change in that Lois Lane quickly learns the identity of the flying hero with Clark Kent’s fumbling journalist being sidestepped completely. This results in an authoritative and domineering portrayal by Henry Cavill who convincingly steps into the role. He is surely a rising star to watch out for.

Lois Lane has also been altered from Margot Kidder’s fiery, spontaneous lead to the perhaps more street savvy and calming leading lady of Amy Adams’ representation. Her knack of popping up almost everywhere is somewhat testing but Adams provides a superbly raw portrayal of Lane noticeably dispensing with the usual glamour of other Superhero films around its release.

The only negative is a now established Hollywood blockbuster trait: the need to have a large scale fight in a city and obliterate as many buildings as possible. Man of Steel takes it to the next illogical step by destroying that city in a hope that audiences will love the pointless sequences of glass shattering and people rocketing through entire skyscrapers but this lengthy battle leaves concentration wandering.

For a reinvention of an established franchise, Man of Steel strides boldly into new territory, dirtying Superman’s squeaky clean image without losing his core beliefs and confidently bringing him into an arena where he’s not the only Superhero name vying for attention.