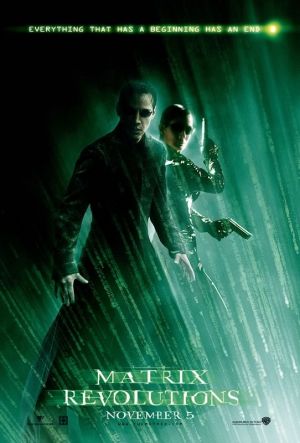 
As a trilogy about digital realms, kung fu fighting and robot tormentors draws to a conclusion, what has The Matrix left to offer?

As an act of survival against the machines, the humans prepare to stage one last battle in their home city of Zion while Neo takes on the dangerous and now immensely powerful virus known as Smith.

Throughout the films there have been numerous memorable characters and almost all of them get an appearance during this one. The Oracle is once again bombarded with countless questions by Neo which she largely fails to answer and The Merovingian has an extremely brief appearance that is let down by his quick obedience once Trinity threatens his life. This is tarnished further by his dull cause and consequence spiel with all of this resulting in too much time being spent trying to expand, explain and impress the viewer into submission, which neither works nor entertains.

Niobe, played by Jada Pinkett-Smith, finally gets some limelight as she pilots a ship through a mechanical line which is apparently an impossible task. This scene builds up pace and excitement surprisingly well to create epic visuals as the ship glides and crashes down the narrow tunnel. Niobe had been a little uninspiring up to this point but she is redeemed here as a strong minded and fully capable character.

There are some sublimely iconic moments; in particular the Neo versus Smith fight in the pouring rain. The CGI empowered brawl combines music and visual effects to create a hugely impressive scene where raindrops react to impacts in slow motion as the two opponents circle each other in the sky.

Unfortunately the one aspect which lacks much conviction is the central battle of Zion. The mechanical robots controlled by soldiers were a novel inclusion in 2003 but the mass of machines, moving as one like a school of fish, are an incredibly tiresome visual enemy and for such a repetitive fight, with no mix up of opponent, the battle could have been heavily shortened.

Revolutions provides iconic moments, some gripping action scenes, and even ties up a lot of loose ends but it’s the endless explanatory conversation and need to complicate and expand the matrix ethos which slows pace and dampens interest.