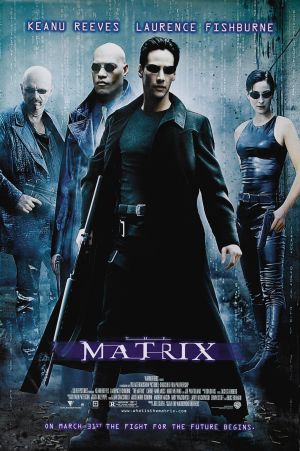 
Does The Matrix manage to mix philosophy and physical action within a digital machine made world?

The Matrix is set in a distant future where reality as we know it isn’t as real as humanity is lead to believe. Following the story of computer hacker, Neo, a war is brewing between the machines and man, who need Neo’s help to end it once and for all.

Bursting on to the scene in 1999, The Matrix is packed with moments that became instantly famous, most notably rooftop bullet dodging and Neo losing his mouth. It’s these scenes that make the film so iconic due to the fantastic visual effects and modern outlook, rounding off the 20th Century with a futuristic and compelling film. These blockbuster scenes are still the highlights of the film, with enough well thought-out conversations, interesting character interaction and fight scenes to compliment them.

Its complexity and depth was a huge aspect of its success but ultimately the film lies in two key settings: the developed world and the futuristic, apocalyptic world. Each offers a slightly different feel; one focusing heavily on martial arts and quick action fighting and the other providing a lot of conversation and thorough explanation. This helps add distinction between the two worlds and allows the viewer to embrace the quiet moments for a chance gain answers.

Our hero’s transformation throughout The Matrix is perhaps the most interesting aspect of the film. He is seen to change from nerdy computer programmer to a possible world saviour. Despite this his core characteristics are the same and his continuous questions become a little irritating after a while – something that will hopefully lessen as the franchise goes on and Neo gains more knowledge about his purpose.

The final scenes employ incredible change in capabilities, setting up the franchise beautifully with unlimited possibilities. Now with more of a traditional hero spearheading the franchise forward, let’s hope his engagement improves to create a truly top class franchise.