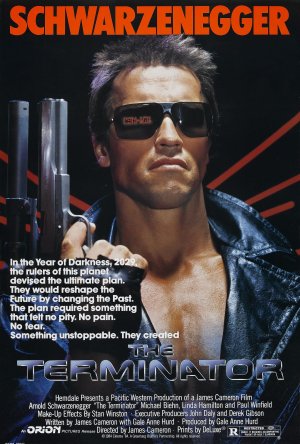 
The Terminator knew he’d be back, but what made this film spawn a franchise?

When a killer cyborg is sent back in time to destroy humanity’s one hope against extinction, a single man is also sent back to stop him.

The film has a dark tone throughout with James Cameron’s direction fantastically merging quick paced action scenes and 80′s electronic music to rank up the film’s suspense and tone. Considering this was made in the 1980′s, the future scenes still look reasonably fresh with thick smoke obstructing views and restricting the action to small areas, both helping create realism. The CGI is also outstanding with robotic parts of the Terminator becoming more present throughout the film, with these effects being eye-popping for audiences at the time.

The story itself is handled maturely and for a film based significantly around the action genre it adds a lot more depth than entirely necessary. The film’s characters are all wonderfully cynical of Reese’s claims of a dire future, and a psychiatrist even claims he could make a living off him. The intricacies of the science fiction plot are continued throughout with the three screenwriters providing all the answers; it is this thoroughness of story that has resulted in The Terminator spawning a continuing franchise as well as a TV series and graphic novels.

The dark tone of the film even flows into Kyle Reese, who despite being the film’s hero, comes across first as a serial killer, then as a dangerous captor. This is a great way to create yet more suspense and gives his difficult past some legitimacy when he gets aggressive with Sarah Connor. His retelling of the future and the flashback scenes of his life after the nuclear fallout are highly entertaining and are summed up brilliantly by Connor: ‘your world is pretty terrifying.’ Flashbacks including sci-fi guns, hovering gun ships and a desolate battlefield where human skulls make up the ground composition create a dark world to contrast the familiar 80′s setting of the present day.

The Terminator is a classic Arnold Schwarzenegger film; he’s perfect in this role and with a limited acting ability he shows that he can nail robotic every time. His stylish leather jacket, duel wielding guns, and ‘I’ll be back’ line are ingrained in film legend and are a huge reason for the success of the film and the franchise as a whole.

It may not be the most sophisticated science fiction movie of all time but there’s not much that beats it in style and action.