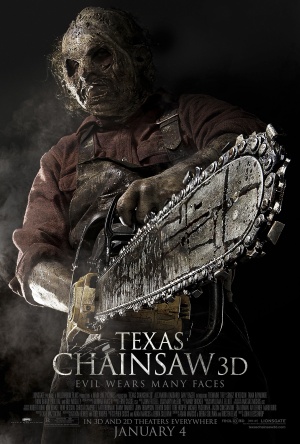 
Yet another reinvention of the franchise, two families at war with a new twisted history and 3D are all present, but can anything beat the original?

When Texas Chainsaw Massacre family, the Sawyers, are killed, a baby girl is saved from murder to be raised elsewhere. Years later when she discovers her past she returns to the place where she was born only to find that some families members may not have perished after all.

Unlike any of the previous films, this one directly follows on from the seemingly untouchable original with a woman being rescued from imminent death by Leatherface. This direct continuation helps give the film some added prestige, but unfortunately this doesn’t last for long and instead jumps forward two decades and introduces an almost identical setup to the original: a group of friends visit a house of a family member only to be hunted. This is a real disappointment as setting the film just after the original would have been a fascinating watch for the franchise’s fans.

However, the film does add a great new element to the franchise with the two feuding families: the Sawyers and the Hartmans (a murdering, white trash family). This helps add an exciting plot and importantly moves away from the standard chase-slash formula that has become expected. The victims end up unsure of whom to trust and, with two murdering families on the loose, thriller elements begin to emerge without diluting the horror genre.

On the other hand the main franchise villain, Leatherface, is certainly diluted in significance as he gets beaten up by a couple of Hartman men and is defenceless against them. After six films where he and his family appear unbeatable, him getting chained up and almost killed is a really disappointing display, especially as his enemies don’t seem to be anything special themselves.

The film also includes a clever video call of a police officer walking through Leatherface’s house. This becomes very effective at creating a scare, especially when the officer becomes scared himself. Although the setup is highly unrealistic and slightly frustrating (a police chief is overruled by a civilian on giving orders), the result is well worth it.

Texas Chainsaw is better than most continuations of the franchise, but without Leatherface’s complete dominance over others it simply can’t compete with the original.