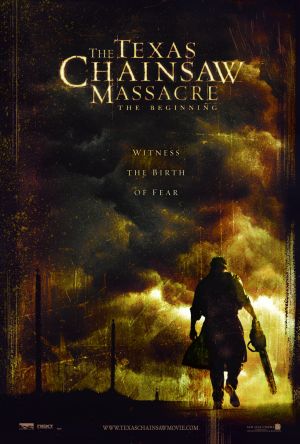 
Creating an origins story about the infamous cannibalistic family is new to the series, but is what we learn easy to swallow?

When a group of youngsters get involved in a car accident, the local sheriff detains them at his house, but it doesn’t take long for them to realise this isn’t ordinary police procedure.

Where the first film made Leatherface a squealing child when confronted with his father, this film once again places him as a mute adult monster to simply do the bidding of his family, which he does with a no nonsense attitude towards violence. This is definitely a step back in providing a scare factor as although Leatherface knows what he’s doing, he seems to have become a capable henchman rather than an unpredictable and dangerous child. The faces he wears seem like a strangely normal occurrence for him as someone who wants to be accepted as normal, possibly even handsome, and is a good addition to understanding more about Leatherface, although this understanding and his obedient nature inevitably make him less scary as a character.

As an origin story, The Beginning focuses more on the only interesting aspect of the previous film: Uncle Charlie Hewitt. R. Lee Ermey, who plays Uncle Hewitt, brings a great on screen persona, entertainingly demanding his sheriff name be used over the radio after wearing the murdered sheriff’s clothes and coyly asking one of the victims, ‘you can stay?’ before tying her up. Hewitt importantly initiates the cannibalistic eating, and although it’s not obvious whether this was done previously, he is shown as the psychotic leader and visionary of the family which works fantastically with such a charismatic and interesting character spearheading the family’s downfall into chaos.

The unfortunate victims are given an interesting back story with two brothers, one a Vietnam veteran and another who burns his own military tour draft card. This creates a brilliant dynamic especially when both are seen to be heroic, helpless or cowardly and gives more relevance to their horrific circumstances. The relationship between one of the brothers, Eric, and girlfriend is also used well with their planned spiel on how many kids they want. This is repeated when their futures become more uncertain – when Leatherface creates a new face, this relationship is used to incredible effect to highlight the monstrous act.

The Beginning may not be as scary as others in the series, but it uses the victim’s relationships and Uncle Hewitt’s persona to good effect, creating an entertainingly gross horror movie.