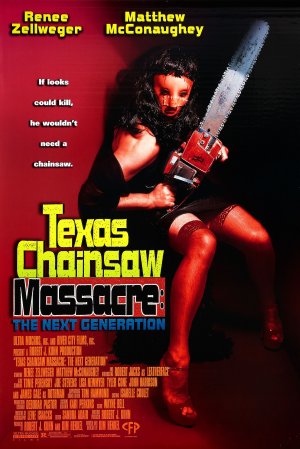 Texas Chainsaw Massacre: The Next Generation (1994)


Bringing in younger stars re-launched the franchise, but did it cut itself a new path?

After four teenagers drive away from a high school prom night, they crash their car and quickly become chased and captured by a group of oddball killers.

Reneé Zellweger plays the protagonist and is the first strong female victim of the franchise. She’s smart (she knows that a lack of sex doesn’t cause prostate cancer), and she’s courageous (she deals with most horrific scenario’s with a clear mind and with a plan). She doesn’t even scream as much as other characters and is prepared to do action style jumping off houses. She’s a great character and is the standout female role of the franchise to date.

This is by far the most interesting reinvention of the franchise so far, with the idea that the continuing massacre has been ordered by a secret organisation that controls the world being it’s base. With this, baby faced Matthew McConaughey plays a convincing sadist and has a hydraulic leg that is controlled by a remote control. These elements are bold new additions and although silly, do make the film stand out and appear instantly entertaining.

Having said that, there are some very poor scenes, not excluding a car chase where McConaughey’s character chases his victim along a long road while the victim refuses to run through trees that would be a safer and more logical option. Although scenes like this don’t ruin the film, they do create a mix of frustration and undersigned amusement when watching. Along with this, the film fails to highlight the cannibal side of the family that throughout the franchise has always been a key aspect of creating shock and horror.

The main villain of the franchise, Leatherface, acts clumsily and appears incapable of taking on a normal person; he is only a real threat for one young woman and appears extremely lucky in any other circumstances, which is reminiscent of Ghostface in the Scream franchise. He is also much smaller in body size than in previous films with all of this resulting in a vastly diluted ability to scare.

The Next Generation starts off well and certainly keeps entertainment value throughout, but with bizarre storylines, scenes and props, this film is never believable enough to become a truly great horror.