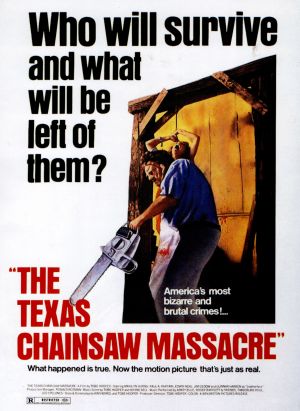 
For a film which proved massively popular at the U.S. box office and spawned six children, how good really is this 70s slasher?

When a group of five friends head to an abandoned house in search of a relaxing getaway, they soon realise there is a peril nearby which will endanger their lives one by one.

Like most horror films around the time of Texas Chain Saw Massacre’s release, it begins at a slow pace. However, by picking up a hitchhiker, played by Edwin Neal, the film introduces an almost unsettling atmosphere within the camper van early on. Director Tobe Hooper uses shots which separate the hitchhiker from the group, making him look confined, with his knowledge of the nearby slaughter house and his self harm being revealed gradually and adding to his enigma.

What’s more, the action itself does away with any suspense, largely removing expected prolonged chase scenes and using the killer’s strength and dominance over his victims to quickly end struggles – this results in shocking and frightening scenes in which victims are completely helpless. The sound in these scenes is mainly provided by either a nearby generator or a chainsaw, both of which overpower all other sound and forces the viewer to connect with the killer’s actions.

Director Tobe Hooper uses close up shots of old bones throughout the film and especially in the slower segments to generate an eerie atmosphere. One scene in particular focuses on the many human arms, legs and jaw bones within a room for over two minutes, with one of the group simply lying on the floor. This simplicity and duration make the characters horror relatable and creates a huge amount of discomfort.

A scene where the victim is tied to a chair to enjoy dinner is a particularly unnerving highlight with Hooper using POV shots to attach the viewer to the scene; the bizarre killer and the lead’s helplessness warrants the scene to be stretched out for several minutes. Hooper’s insistence on close ups of terrified eyes and distorted screams all result in an impressively disgusting scene even in comparison to modern horror, which offers much more physical action and gore.

With its no nonsense action and clever use of the camera, this 1974 horror has stood the test of time better than most.