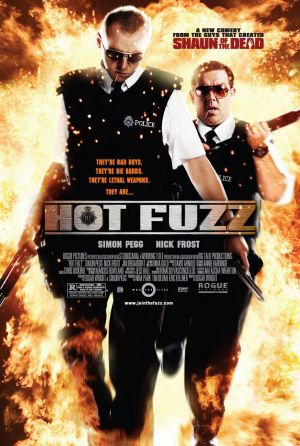 
With lots of pressure on this unofficial sequel will it be a cop out?

Super London cop PC Nicholas Angel is given a promotion to the quiet village Sandford. When a series of unfortunate accidents hit the sleepy village Nicholas finds out it’s not as ideal as it’s cracked up to be.

Under the direction of Edgar Wright this film has the all out action visuals you would expect from the films of Michael Bay and Tony Scott with high tempo camera movements and quick cutting. This terrific choice was integral to the style of the piece and allows the comedy to come from ridiculous aspects of a rural police officers job; this means chasing an escaped duck around a park turns into an exaggerated action scene.

After working as Simon Pegg’s sidekick in their previous work together Nick Frost really comes into his own. His portrayal of PC Danny Butterman has a dual use; he emphasises Pegg’s role as Butterman, who is continually in awe of his experienced new superior, as well as acting as a Yoda-like guide to how he thinks action cops should be. This dual role helps Nick Frost outshine Pegg and the impressive supporting cast.

With Jim Broadbent, Timothy Dalton and Paddy Considine amongst the supporting cast it’s arguably the best cast ever. Each character is given enough depth and individuality to stand out from the rest and with a continual supply of well known faces, scenes never become tiresome.

With real police paperwork and the shortest car chase shown on camera Hot Fuzz is a no-holds-barred adrenaline fuelled thrill-ride and will certainly be known as a great British comedy.