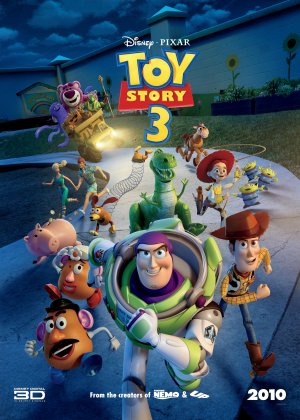 
What will Woody, Buzz and the rest of the toys do now that Andy is off to college?

With Andy growing up the toys are left forgotten. When they accidentally get put in the trash they decide that seeking a new life is the only option, but the idyllic new home they find isn’t what it seems.

After eleven years, Toy Story is back and uses that time to build on the previous film’s mention of toys being eventually unwanted by their owners. The film makes this its main theme, to it’s strength, with the toys struggling with a life of neglect from their owner and Woody being the only toy with enough love for Andy to not let him go. The film deals with this situation surprisingly seriously while keeping problems strictly toy focused, like a toy worrying about being replaced or forgotten and dealing with lost friends. These concerns turn toys into villainous or deflated characters and create characters that are so engaging and troubled that a few scenes are absolutely heart wrenching, which is a wonderful accomplishment for Pixar.

But the film isn’t all emotions, it’s also easily the most action packed of the franchise with more changes of scenery, a proper toy gang to compete with and even an Ocean’s Eleven type montage sequence to pull off a plan. The film wonderfully introduces the main characters with Andy playing with them, but this time the boy’s imagination is used to create a western setting and brings a fantastically action packed scene where a fast paced train robbery and a huge flying ship dominate the screen. This action blends seamlessly with the more sensitive material throughout the film and keeps entertainment levels at an all time high.

The idyllic new home they find is actually a day care centre for children, called Sunnydale, which promises they will be played with every day of the week. But Sunnydale quickly becomes referenced similarly to a POW camp in The Great Escape with ‘The Box,’ patrols and sirens all used to great effect to keep older fans laughing. The film also does the same with an eerie flashback from the sad clown Chuckles, who fills us in on the main villains’ backgrounds. This is done with a grave, traumatic sequence with a film noir narration that perfectly balances between devastating and oddly amusing for older audiences.

Luckily the franchise has grown up with its audience, and with more action mixed in, a great deal of heart and an incredibly mature subject matter, this the most confident outing of the franchise to date.