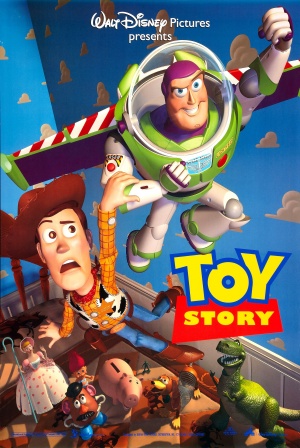 
This ranks as one of the all time animated greats, but is it still as loveable as we remember?

When a new toy, Buzz Lightyear, enters a young boy’s room almost everyone welcomes him with open arms, but when one jealous toy, Woody, accidentally pushes him out of the window an adventure begins which puts two toys lives endanger and risks them being lost forever.

Toy Story is a kid’s favourite and has been enjoyed by everyone, even adults, since its release in 1995. With its clever angle of getting into the mind of a toy, it’s easy to adore the characters and charm that comes with certain loved childhood toys. This is mixed with the toys all having worries and relatively normal lives as seen with Mike the Microphone’s announcement: ‘Tuesday nights plastic corrosion awareness meeting.’ The film goes to extraordinary lengths to establish an oddly realistic dynamic between a boy and his toys. With leadership, team organisation and a panic for being replaced at birthdays and Christmas, the film is brilliantly unique in its vision.

The lead characters, Woody and Buzz Lightyear, are polar opposites in their backgrounds: Woody is a cowboy and Buzz is a space adventurer. This is a nice touch and signals a clear progression of toy popularity changing throughout time which is the case for all young children going through stages of interest. They are both born leaders and Buzz’s assurance that he is in fact a real space ranger annoys Woody to no end, which is highly comical and gives the film yet another simple but unique aspect. What’s more, neither of the leads are easily the stand out favourite for viewers making their final united teamwork even more enjoyable to watch.

What is surprising however is the amount of dark subject matter that happens throughout the film. A mutilation-obsessed neighbour, Sid, should be very out of place in a kids film, but it manages to balance this villainous character with the fact that the main characters are toys, helping detach younger audiences from feeling threatened themselves. This is even cleverer considering that a portion of the film follows Buzz and Woody in captivity with deformed and tortured toys surrounding them.

The film also centres on a group of toys that either try to harm others for their own selfish gain, or act like an angry and dangerous mob when someone does something wrong. If this were a normal film with normal human characters it would be inappropriate and unwatchable for many of the younger viewers who currently love the film.

For a kid’s film that can entertain adults too and with a great line up of characters, Toy Story is hard to beat, but you probably already knew that.