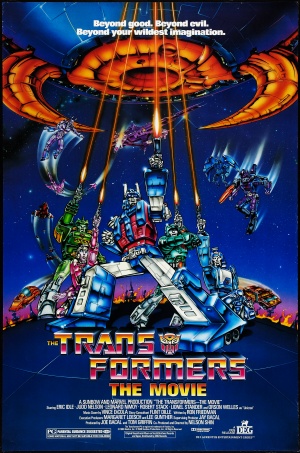 
The original 1986 Transformers movie has been dwarfed by its younger siblings, but Michael Bay could learn a thing or two from this.

Megatron must do Unicron’s bidding after he is captured by the moon-devouring evil and must destroy the leader of the Autobots and his army to survive.

As should be expected from an animated movie living off the hype of a still relevant kids TV animation, this 1986 movie is all explosions, battles and all conquering enemies. The animation style is loyal to the original TV series, and so is the choice of characters and voice actors – that makes it at least more authentic than Michael Bay’s newer franchise reincarnation. What’s more, the battle sequences are more adventurous than anything done since in this universe with transformers constantly changing and being killed in continual and all-out battles.

The setting veers quickly away from Earth and focuses on several other planets including the self-explanatory Planet of Junk where a fascist state seems to prevail. A four-headed being declares “guilty or innocent” to prisoners before they die either way. It’s exactly this kind of free form planet hopping and species discovering that makes Transformers: The Movie so much more interesting and unique than anything we’ve seen on Earth in the franchise. It avoids the thriller/action pit that this franchise has occupied for too long while striving to be bigger and more adventurous.

Megatron is present as the usual fearsome enemy but for this first film they have unveiled a new villain who devours planets: Unicron. Unlike most action films that are proven disappointing by a bigger-is-always-better philosophy, the film writers in this case are proven right by their choice to include this new villain. His dominance over Megatron assures his presence as the ultimate dominate force to be reckoned with and the on-going struggle between them and the eventual end battle scene offers something different and striking for a Transformers movie.

Don’t get me wrong, this isn’t intelligent science fiction or a perfect action movie, it’s just made choices that make it more entertaining than it otherwise could have been. Incidentally this was also the last cinematic appearance of Orson Welles; he played Unicron and reportedly hated the movie. Don’t let that stop you, this is a fun watch just don’t expect too much.