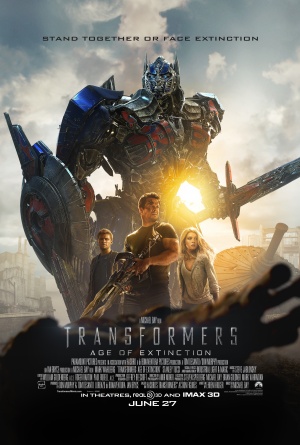 
Who do you call when you need a franchise saved? Well, after The Italian Job and Planet of the Apes, Mark Wahlberg obviously…

When an inventor reactivates Optimus Prime a mysterious transformer attempts to take Optimus captive. With the U.S. government now working against his Autobot allies he must team up with a group of humans to get justice.

In recent years Mark Wahlberg has become the go-to action actor and with his turn in both The Other Guys and Ted he’s even playing the comic card as well. After Pain and Gain, his test film with Michael Bay in 2013, we get the first in another Transformers trilogy and to my surprise he’s actually rather decent in it. Wahlberg plays a down and out inventor and is overly protective of his daughter and it’s this relationship that ultimately defines his character. He does a lot of whining (and even cries from his fist at one point), but his dad role makes these annoyances bearable; he’s now an uncool dad rather than the young jock, and this new dynamic works a treat.

Funny characters have previously plagued this franchise and yet again we’re introduced to another Transformers ‘funny’ character, who helps pit the film purely for under 10s. Thankfully he dies a gruesome death early on, which marks a departure; no more cute laughs for this franchise. Having said that a quirky character played by Stanley Tucci mimics Steve Jobs as a revolutionary corporate thinker but is spat out in the end as a subservient joker which begs the question: is the next film going to be Transformers 2 all over again?

The world itself is given a darker edge, first shown by a gruesome death and later by Optimus Prime’s vengeful attitude. Previously he’s been a shining light as the guardian of Earth but seeing him reject this makes for more accessible adult viewing. What’s more a new lead villain takes over from Megatron, and he appears even more lethal and epic than anything we’ve seen before. Formerly loved Transformers are killed off (instead of the usual punch ups) and the film’s plot is the best of the franchise to date. It’s not perfect however – with such a strong lead villain already in place, Megatron’s return seems unneeded, but as a new trilogy it seems he’s essential villain fodder.

I'm astounded. Michael Bay has made a decent Transformers film that almost rivals the original. A refreshed cast, darker themes and a new villain finally update a franchise that needed it two films ago. Bravo.

Is it too late in the day to bring in weary crowds after so much disappointment? Let us know your thoughts below.