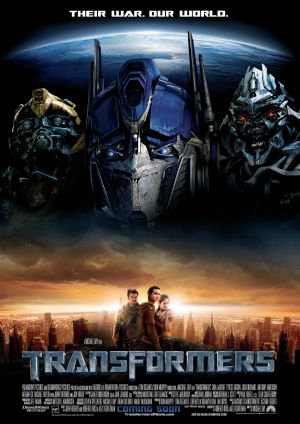 
This franchise started out as a toy range before spiralling into comic books, animations and video games, but does this Hollywood blockbuster out perform its older formats?

Sam Witwicky buy’s his first car which turns out to be a transforming, ass kicking alien robot, inevitably involving him in an all-out ‘goodie’ versus ‘baddie’ war between two opposing sides: the Autobots and Decepticons.

Shia LeBeouf plays the lead role, Sam Witwicky, with a confident, witty, and extremely enjoyable persona that was perfect for this role. Sure, there are still a handful of military soldiers that we see throughout as expected, but they mainly take a back seat and let our geeky, but still pretty cool, teenage lead take the reigns. His being in over his head allows the audience to relate more to the character than if he were a capable blockbuster soldier who would most likely take everything in there stride – after all, shooting things and blowing things up is what they do, but a teenager who’s just bought his first car is a very different story.

When Transformers hit screens in 2007 it brought a new visual treat to cinemagoers with complex and intricate transformations that saw every bit of metal and cog shift position. These are fantastic to watch and Michael Bay makes the most of them with enough slow motion transformations to really aid his style of direction. Let’s just hope this doesn’t fade and become less spectacular as the franchise goes on. Additionally, the soundtrack to accompany this spectacle is fantastic, particularly the main instrumental theme tune played before battles or fights.

On top of the impressive visuals provided by the transformers their personalities also manage to shine through; the filmmakers successfully associated real characters with large chunks of metal, that otherwise are difficult to distinguish between. They continuously use funny phrases that they learn from the Internet, and approach humans with extremely funny consequences and a lot of (metal) tongue in (metal) cheek.

Transformers is a successful debut blockbuster in a growing franchise and is boosted to success by its fantastic lead and accompanying transformers. It has everything in it that a modern action film needs: explosions, chases, large-scale battles and has the crown jewel: the never seen before live-action Transformers themselves.