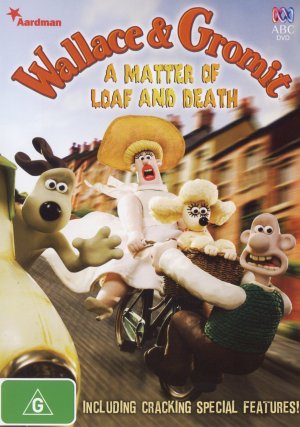 Wallace and Gromit in A Matter of Loaf and Death (2008)


After a gap of thirteen years since the original trilogy, will A Matter of Loaf and Death rise to the heights of its predecessors?

With a serial killer on the loose knocking off all their rival bakers, Wallace and Gromit’s bakery, Top Bun, is flourishing. On their daily round they save the life of ex Bake O Lite girl Piella Bakewell and her poodles Fluffles, and soon love is in the air for Wallace.

Making a sequel so long after the original trilogy means it will be compared to its high calibre predecessor so it needs to be just as strong or better to avoid being slated, just look at The Phantom Menace. This is the largest issue; if it were a standalone film it would have been a bigger hit than A Grand Day Out was. However, being that it was created after, it just feels like the same again from Nick Park and the folks at Aardman.

One lovely aspect of Nick Park’s work is how much it is improved by second or third viewings so that the little visual details and subtle gags come out. The visual style and script could easily have come from a Hitchcock film but it is these gags that help bolster the comedic side.

The plot is a somewhat familiar one to Wallace and Gromit aficionados. Wallace’s blindness to the obvious leads him to make catastrophic choices, from which his faithful sidekick Gromit must ultimately save him; it’s much the same idea as A Close Shave and The Wrong Trousers. The best aspect of A Matter of Loaf and Death is that it is like the originals and getting back to where the franchise was born. This return brings back the quaintness that has come to be expected.

Overall this film isn’t as groundbreaking as its predecessors; however the simplistic design means that it will be loved like the previous films.