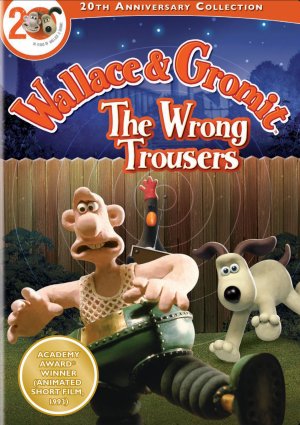 Wallace and Gromit in The Wrong Trousers (1993)


After BAFTA awards and an Oscar nomination for A Grand Day Out, how does the duo’s second adventure match up?

In a switch from the previous film’s simple holiday plot, Nick Park has made The Wrong Trousers into a Hitchcock style mystery drama. This choice has made the film dynamic and exciting with the chase on the train showing just how far it has come from its humble background.

As well as a more rounded story we are invited to see the cosy English house of Wallace the inventor and his highly intelligent dog, Gromit. The design of the house cleverly echoes back to Park’s northern roots with the rockets on the wall replacing Hilda Ogden’s ducks, however he kicks it up a gear with contraptions that look like they could have been designed by illustrator Heath Robinson.

The increase in quality and change in style means that they can add action sequences to the film, two big action sequences in a thirty minute film is impressive calibre. In one of these action sequences we see new character, Feathers McGraw pull off a diamond heist using a sleeping Wallace and the Wrong Trousers. This action sequence is brilliantly brought to life with all the excitement of Ethan Hunt dropping into a highly alarmed room.

The second big action scene is a chase on top of a train, this sequence could fit directly into a bond film, but in typical Aardman style it is only a model train. Without spoofing action films it expertly pays homage to the genre but gives it quaintness.

Overall, the animation is stronger in this film because there were more animators working on the project, meaning more time and care could be taken for each shot. If this is a sign of things to come it can only be a good thing.