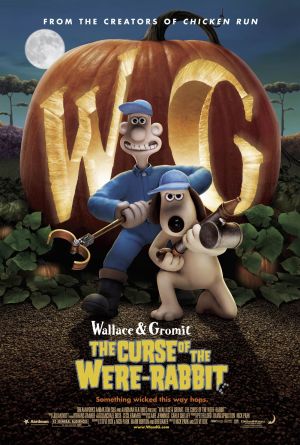 Wallace and Gromit: The Curse of the Were-Rabbit (2005)


The two previous Wallace and Gromit films have been crime capers, so how would their journey into horror go?

Wallace and Gromit have turned 62 West Wallaby Street into an International Rescue style base of operations for their new pest controller business. With the annual vegetable competition approaching, the town is racked by a spate of attacks on giant fruit and veg and in their fear there is only one duo the villages will turn to.

Expanding to a feature length film allows Aardman to create the entire village which is full of warmth and kindness as well as being thoroughly British. The addition of an undercurrent of tragedy that you find in other family films would have helped the audience engage with the characters more without forfeiting their individuality.

One thing that has not been lost from the original trilogies is the subtle visual humour. These are a hall mark of this franchise and some of the hidden jokes will take a few viewings to spot. They range from the extremely obvious King Kong and Frankenstein send-ups to the written references “East of Edam” and “The Buck Stops Here”. These hallmarks are getting better and more intelligent and enjoyable as the installments move along.

With the new village comes a plethora of smaller characters which is something new to the franchise. The vocal talent for these characters seems have been chosen from all areas of British comedy, from The League of Gentleman’s Mark Gatiss to Are You Being Served star, Nicholas Smith. All these roles are played beautifully however they aren’t helped by the truly awful Peter Kay as PC Mackintosh. Where every other performance seems to fit perfectly into Wallace and Gromit’s world, Kay manages to overact and perform like he is the star rather than support like his role requires.

There are certainly some great things about Curse of the Were-Rabbit, however it is possible that the boat has sailed on Aardman being in British hearts, at least for this newer installment.