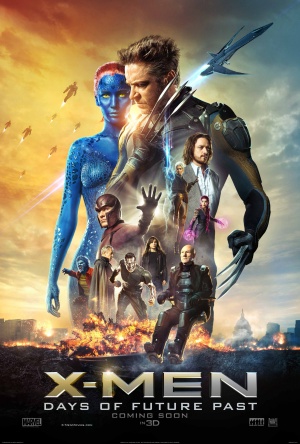 
Mixing old and new X-Men actors and characters is a bold move that perhaps only this franchise could pull off.

When the future sees mutants hunted and killed by lethal sentinel robots, Wolverine’s subconscious is sent back in time so he can adjust the history that made these events happen. He must locate and persuade both Professor X and Magneto before they get to the real problem: Mystique.

The young actors that impressed so well during First Class importantly continue to impress here. Fassbender again steals the show as the ultimate badass mutant, but this time he’s entirely vindictive and certain of his thoughts against humans. Professor X thankfully has a lot more development than in First Class, with him dealing with the fallout out of the war and that films terrible conclusion. McAvoy’s character excels during the darker moments of his life and makes a needed change from the righteous, mostly cheery and slightly annoying Professor X we saw in First Class.

A breakout however is easily Mystique who until now has always been a smaller, yet kick ass side-line mutant. This is perhaps unsurprising seeing as Jennifer Lawrence picks up the role she played in 2011, a year before The Hunger Games and the Hollywood-Lawrence love-in began. This time round Mystique is used as a narrative drive, with the characters needing her to resist capture, and her confused state of alliance in between Professor X and Magneto proves fantastic fodder for the emotion we know she can portray so convincingly,

But with all of that good stuff we also need wondrous action and luckily that’s on the cards as well. Several scenes astonish with a particular mutant’s ability to use portals to jump from one location to another being both a great action device as well as visual treat. She creates them at whim, with mutants jumping through at one angle and shooting out somewhere else in the same shot with different angles being portrayed through both. Another mutant, Quicksilver, can run extremely fast and provides a surprisingly laugh out loud moment; he runs around a room lightning quick in seemingly slow motion, moving peoples hands and pushing bullets in different directions with a grin of his face. It’s a charming, hilarious and beautiful scene and one of the stand out of the entire franchise.

The Days of Future Past may have Wolverine back in the lead role, but the merging of two X-Men generations comes across splendidly while keeping the focus on the young, new cast. Action is incredible and with a solid and interesting storyline that expands around Mystique for the first time this is one of the absolute highlights of a mostly consistent franchise.

Both X-Men casts meet up in this film, but was it too much to handle? Let us know what you thought in the comments below