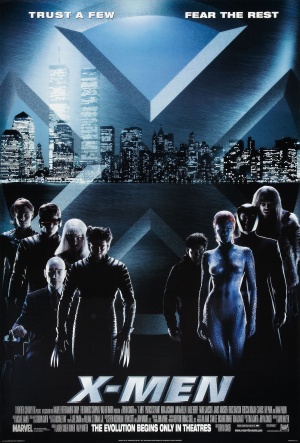 
X-Men was one of the first major films to mutate the big Blockbuster into a comic book dominated landscape. Worth revisiting?

When the U.S. government pushes a Mutant Registration law that would mean all persons with mutant abilities would need to publicly identify themselves, one particular mutant, Magneto, is finally pushed to his limits. His old friend, Professor X and his team of X-Men are the only ones who can stop him from starting an all out war with humanity.

Fans of X-Men before this movie would have been familiar with bright coloured costumes, but Bryan Singer’s X-Men cleverly trades all of that in for stylish and sleek grey outfits that suit the early 2000′s and help keep the films look modern even several years later. The translation to film is also given a tongue in cheek nod by Wolverine with the mocking of the X-Men’s names to Professor X: “Storm, Cyclops. What do they call you? Wheels?” and Cyclops’ dig at Wolverine’s past outfits: ‘What would you prefer, yellow spandex?’ All of this combined combats the far-fetched nature of the source material and manages to keep the film’s dramatic tone appropriate and inviting for unfamiliar audiences.

This X-Men film challenges the action genres tendency to focus on only a handful of characters and direct person-to-person problems by employing an imminent war against mutants. This is shown by using a politician, Senator Kelly, who strongly pushes a discriminative law that effects a vast amount of people around the world and is cleverly blended into the hero characters developments with one of the X-men, Jean Grey doing a talk to senators. This large scope helps build a fascinating and intelligent backdrop and precursor for the storyline’s main action and character progression.

The star of the film is undoubtedly Magneto, played marvellously by Ian McKellen. It’s not often that a villain comes out as a character favourite, but McKellen plays Magneto with a menace and anger towards humans that balances the good natured do-gooders that largely make up the X-Men team. The opening scene introduces him as a Jew during the holocaust in Germany and this cleverly ties in his deep-rooted fascination with a survival of the fittest philosophy and his anger and resentment towards politicians and soldiers. His story is explored more than almost any other character, showing off his grand powers of magnetism and his deep toned voice with brilliant meaningful quotes: “America was going to be the land of tolerance. The land of peace.”

Action itself is low-key compared with modern superhero films i.e. entire cities don’t get destroyed, but they still prove entertaining. In particular the scene when Magneto controls a squad of police officers guns at a train station is a fantastic visual treat. However the end scene does appear dated as the mutants fighting is largely stagnant, generic fighting and fails to implement the characters powers to build up larger and more impressive scenes. Something that X-Men films and superhero films in general have excelled at since this. With so little build up to a resolution, especially with a sizeable time when they’re all captured using twisted metal, the ending comes across as rushed which is a disappointing way to finish a film that can spawn sequels.

X-Men visually still looks fantastic, and with its mainly serious outlook on world problems and a brilliant villain it still rates amongst the best comic book movies ever released.


X-Men was launched here, but what other franchises have had such a solid start?