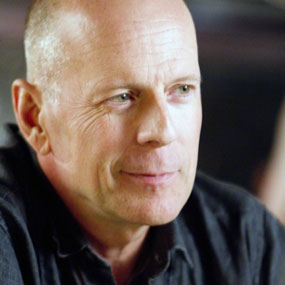 We reserve this page for the best people involved in film so it’s only right we cover Bruce Willis who has an eclectic career spanning four decades and counting.

Most famous for his action roles he was one of the first breakout action heroes to not have a body builder’s physique but instead looked more like your ordinary man, but with swagger. We’ve covered Die Hard on the site and rated it highly; it’s unusual to find a franchise so consistent especially one which is twenty five years old and has five films to it’s name, but Willis has a lot more to offer than just action flicks.

He’s also starred in some of the best Sci-Fi movies of recent times – we’re thinking of Twelve Monkeys, The Fifth Element and Looper to name just three. It’s his constant refusal to be type cast which has seen him succeed when others haven’t and as a result he’s brought us fantastic films like The Sixth Sense, Pulp Fiction, and Moonrise Kingdom.

For an actor who is a real class act, Bruce Willis is an absolute gem. We can’t wait to see what he makes next.

Drops out of Montclair State College after his sophomore year.

Is an extra on Frank Sinatra’s “The First Deadly Sin” his character is known as “Man Entering Diner as Delaney Leaves”.

Lands his breakthrough TV role as David Addison Jr. in Moonlighting which he wins Outstanding Lead Actor at the Primetime Emmy's in 1986.

Stars as John McClane for the first time in “Die Hard”.

Nominated for a Golden Globe for his portrayal of Emmett Smith in the film In Country.

Was actually dead but didn’t realise it in The Sixth Sense.

Allegedly buys 12,000 boxes of girl scout cookies to send to the troops in Afghanistan.

Awarded a star on the Hollywood Walk of Fame.

Appears in the music video for Stylo by Gorillaz.