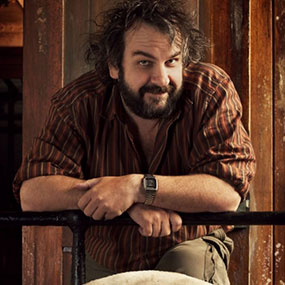 This month’s Person of the Month has had a strange rise to fame since his debut film in 1987. Starting out in Pukerua Bay, a town near Wellington, New Zealand, Peter Jackson spent four years making a film named Bad Taste with friends, about an elite team that battles foul-mouthed aliens. The film was directed, written, produced and starred Jackson, and it got a lot of attention due Jackson’s gory homemade special effects.

From that small success he made his first professional films Meet the Feebles and Braindead (aka Dead Alive) which both utilised Jackson’s quick witted dialogue and bloody special effects. But it was Heavenly Creatures that got him noticed and marked a departure from his earlier work. That film starred Kate Winslet and Melanie Lynskey and was a crime drama meet fantasy, but more importantly was a film that was meant to be serious. The film won an Oscar nomination for Jackson and his writing partner Fran Walsh, which saw the world of Hollywood open up to him.

The Lord of the Rings trilogy came calling next, and this is where most film fans became aware of his existence. After a gruelling 1997-2003 commitment he garnered seven Oscar nominations and three wins for his part in the films, following them up with big budget remake King Kong, unnerving drama The Lovely Bones and is currently knee deep in The Hobbit trilogy.

We’re excited post 2014 when Jackson will be tackling the next Tintin project, The Adventures of Tintin: Prisoners of the Sun, and hopefully he’ll make more diverse films ranging from the gory, to the dramatic, to the comedic. Jackson is still a promising talent and with so much of his film career dominated by The Lord of the Rings and The Hobbit films, we’re excited at the prospect of more films to come in and out of Middle Earth.

Born Peter Robert Jackson in Pukerua Bay on the North Island of New Zealand on October the 31st.

Directs short film The Valley for which he also edited, costume designed, makeup designed, special effects co-ordinated as well as starred in

Releases his directorial debut feature length film Bad Taste which he filmed on weekends over 4 years. It wins the audience award at Fantafestival

Directs zombie horror film Braindead. Some audiences were given vomit bags when they rented it

Nominated for his first Oscar, along with his wife Fran Walsh, for Best Original Screenplay for Heavenly Creatures

Wins the rights to make a film from J.R.R. Tolkien’s Lord of the Rings

Releases the third film in the Lord of the Rings franchise which wins 11 Oscars including Best Picture, Best Director and Best Adapted Screenplay

Directs King Kong which stars Jack Black and Naomi Watts, it was nominated for 4 Oscars winning 3.

Releases The Hobbit: An Unexpected Journey which he directed and co-wrote, it earns 3 Oscar nominations

The Hobbit: The Desolation of Smaug is released to the joy of FilmAttic who cannot wait for the full release of the franchise