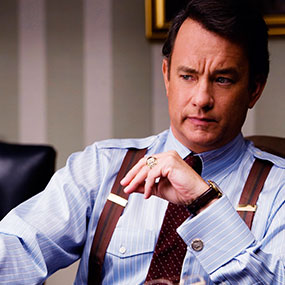 He’s been Big, he’s been Woody, he’s been a Ladykiller – but to us he’ll always be Tom Hanks.

The career of Tom Hanks seems to have been infinite, but in fact it started humbly on an unpopular TV comedy called Bosom Buddies (1980-82). After two seasons the show got cancelled, but that gave way to a guest appearance on Happy Days. When Ron Howard saw him on the show he got a call about a fantasy film called Splash and as they say, the rest is history.

Splash moulded his early romantic, comedy staple characters and gave him the opportunity to continue in feature film roles throughout the eighties, with varying degrees of success with Bachelor Party, Big and Turner and Hooch being the standouts.

The next stage of his career saw Hanks star in more serious roles and became a major box office success. He became a reliable leading man, often taking a role without many supporting actors in such films as Cast Away, The Green Mile, Philadelphia and Road to Perdition. Hanks has proved time and time again that his diversity is extraordinary and even in the more recent film, Captain Phillips, it’s easy to forget the world famous actors presence and sympathise with the character’s situation.

Throughout his career, Hanks has even found time to write and direct two of the sweetest movies from the last twenty years with That Thing You Do! and Larry Crowne. Hanks plays a role in both and interestingly the subject matter of both captures an innocence and fun that comes with a lot of Hanks character choices. What’s more, Hanks began an alliance with Steven Spielberg, working on the films Saving Private Ryan, Catch Me If You Can and The Terminal, as well as collaborating on the television show Band of Brothers.

There aren’t many actors who can still entice audiences into film after film when they’ve been in the business for thirty years, but Tom Hanks is certainly one of them. With his intriguingly low key but high quality output in recent years we’re excited what the future will bring.

Starts attending junior college in Hayward, California where he sees Eugene O’Neill’s performance in “The Iceman Cometh” and decides to become an actor.

Made his feature film directorial debut with “That Thing You Do!”, which he also wrote.

Reprises his role of Woody in the Oscar winning Toy Story franchise.

Gets a Golden Globe Nomination for his role of Captain Phillips in the film of the same name.